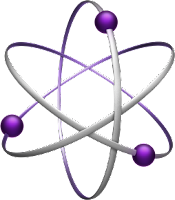 I use iTunes to store and organise my eclectic music collection. I thought I had everything nicely set up, with all the album art showing, and songs that did not belong to an album stored together in their own appropriate collection.

Then I thought I’d give iTunes Genius a try.

According to Apple’s own iTunes 12 for Mac Glossary, Genius offers the following features:

Genius: A feature that enables you to find new music—in your library and in the iTunes Store—related to music already in your library.

Genius Mix: An ongoing playlist in a particular genre—like a commercial-free radio station playing your favorite [SIC] songs—that iTunes creates from music in your library. iTunes can create up to 12 Genius Mixes.

Genius playlist: A playlist iTunes creates of songs that go great with a song you specify.

So I turned on Genius (iTunes menu item Store>Turn On Genius) and, after having confirmed my desire to turn it on, Genius started analysing my music library of some 7,000 tracks. This took several minutes, but then I was able to, for example, select a track and create a Genius playlist, or simply select one of the several Genius mixes that had been automagically created and were now available through the Genius Mixes item in the Library section of the Playlists column.

To be honest, the few playlists I looked at by simply selecting a single track didn’t look much to write home about, so instead I clicked on the Genius Mixes item and was presented with an impressive-looking screen of 12 large icons, each made up of four pieces of cover art. And each icon represented a collection of tracks that purported to belong to a similar theme, as defined by Genius: 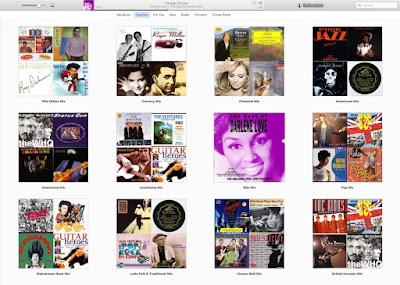 Now I have no idea how Genius figures out what goes where, but if you look carefully at that partial screen shot, it’s clear that something’s wrong somewhere!

The Country Mix and Classical Mix playlists (for that is what they are) look fine, but already with the '50s Oldies Mix there’s a problem, for the Elvis album shown there contains songs, not from the 50s, but from the 60s. A minor problem, you might think, So why then are there three Americana Mix playlists? And why do the second and third of these playlists include artists who don’t belong under the nomer “Americana,” namely The Who, Status Quo, Dire Straits, and The Shadows?

The ‘60s Mix is fine (it shows just a single piece of cover art in the screen shot because I was actually plying that playlist when I took the screenshot), but Aretha Franklin surely belongs more properly in the Classic R&B Mix than in the Pop Mix.

To be honest, I suspect that the problem has to do with the sort of meta information that I have provided for the individual tracks. I ripped almost everything from my own collection of CDs and, although I was always careful to get artist names, track names and album names correct, I did not always fill in fields such as Date or Genre. Presumably, Genius uses this information at least to partly satisfy its classifying algorithm; I expect, too, it accesses information from the iTunes store, based on album name and artist name and that if an exact match is not found, problems can arise.

Genius seems to have plenty of potential, but like everything else that tries to automate, the old adage of GIGO rules the roost: Garbage In, Garbage Out. I don’t provide accurate source information, so the result is not entirely satisfactory. 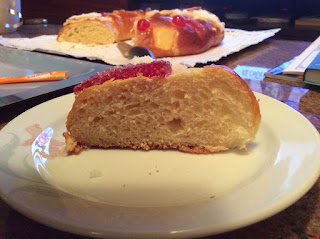 In Belgium and the Netherlands we have Speculaaskoek, in the UK there’s Christmas cake (or, even worse, Christmas pudding), Germans like stollen for some inexplicable reason, and the Italians prefer panettone. Here in Spain, however, the preferred festive pastry is Roscón de Reyes, or Three Kings Cake.

As with many symbols of this period of the year, the Roscón de Reyes probably dates back to the good old days of paganism, before the Christians came along and changed everything to suit their own ideas. A couple of centuries BC already, the feast of Saturnalia was celebrated with candles, gift-giving, the welcoming of the birth of new light after the dark of winter (sound familiar…?) and all sorts of other festive indulgences. Part of these indulgences was a tart, prepared with dried fruits, in which was hidden a bean as the symbol of prosperity.

The idea of the tart survived through the centuries in various parts of the Roman Empire, During the reign of French king Louis XV, a baker decided to hide not just a bean in the tart, but also a golden coin. Since that time, the significance of the bean dwindled, but whoever discovered the coin (later substituted by a small figure) was crowned King of the Feast.

Nowadays, the person who finds the figure is still crowned King of the Feast, but the one who finds the bean must pay for the Roscón!

Roscóns can be bought in all bakers and supermarkets in Spain in the period leading up to and including Christmas (and Christmas here stretches to Epiphany). They come in all sorts of sizes, some cut in half like a sandwich and filled with cream, or some other sweet substance. But that’s the easy way. I thought it would be nice to make my own roscón…

There are many recipes for Roscón available on the Web, but here’s one I found in the book, Pan Casero by Ibán Yarza (a wonderful book, full of very good information as well as excellent step-by-step illustrated recipes for more than 30 sorts of bread). It is quite laborious, but the result is worth it.

Flavourings
Rum 20g
Orange blossom water 14g
Skin of half an orange and half a lemon (not the white part, as this becomes bitter)
Half a cinnamon stick


The day before you wish to make the roscón, the starter dough and the milk infusion must be prepared. Dissolve 2g of fresh yeast (or .7g of dried yeast) in 50g of warm (not hot!), mix in 90g of flour and knead for a few minutes to achieve a nice even dough. Make a ball of this dough and place it in a covered container (sufficiently large to allow for expansion). Place this container in the fridge and leave it there for some 24 hours. As for the milk infusion, allow the orange and lemon peel and cinnamon stick to boil with the milk together for five minutes; remove from the heat and allow to stand for several hours (or the whole night through). During this process, some of the milk will evaporate. Just before you start kneading the dough (next paragraph) remove the cinnamon and the peels and top up the milk with the rum and the orange blossom water to reach about 120g (add a little more milk, if necessary).

On the second day, remove the starter dough from the fridge: it should be well risen and spongy (when I tried this with dried yeast, the effect was amazing: spongy and beautiful. With fresh yeast, however, the effect was less spectacular, so I allowed the mixture to stand in its container next to a radiator for several more hours and that did the trick). Mix together all of the ingredients for the dough, apart from the butter. It is best not to add all of the milk infusion at one time, otherwise the dough might become too wet. In fact, the dough should stick a little to the surface and to your hands. Allow the mixture to rest for some 10 minutes before kneading and notice how it then sticks less. Knead for 5 minutes, then add the butter, small pieces at a time (the butter should be soft, but not melting). Ensure that the butter is fully incorporated into the dough by squeezing the dough with the butter through your fingers: the idea is not to melt the butter, but to incorporate it through friction.

Allow the mixture to rest for a few minutes and then knead it for a further 8 to 10 minutes, until it becomes shiny and smooth (the sponginess of the dough will depend largely on how well this kneading is carried out). Allow the dough to rest in a large bowl until it doubles in volume (up to several hours, depending on the ambient conditions).

When the dough has risen sufficiently, empty it out onto the work surface and knock it back, using both hands to remove all of the gas. Make a ball of the dough, cover it and allow to rest for 15 minutes before shaping it. Trying to shape it without allowing it to relax will cause it to fall apart.

Rub a small amount of flour into your hands in order to shape the dough. Use one or two fingers to poke a hole into the centre of the ball of dough and through it, all the way to the work surface. Widen this hole progressively, until both hands can be used. Then start stretching the dough gently and equally; you can even lift it up, allowing gravity to stretch it further. Finally, place the roscón on a sheet of baking paper and form it into a circle. If the dough seems tense, allow it to rest for some 5 minutes, after which you can carry out any adjustments or corrections you might find necessary. Now is also the time to hide the bean and the figurine in the roscón: do so by pushing them here and there into the base, squeezing the holes tightly to make sure they are sealed (wrap the items in aluminium foil). Brush the surface of the roscón with a beaten egg and then allow to rise for an hour-and-a-half (90 minutes), during which time it should just about double in volume.

Now brush the roscón again with the beaten egg and decorate it with crystallised fruits, sugar, almonds, or whatever else takes your fancy (hint: if you can’t find very coarse sugar, add a teaspoon of water to two table-spoons of sugar, and stir well to obtain a good alternative). Bake in the middle of the oven at 19°C for about 25 minutes, keeping an eye on it that it does not become too brown.

I made my first roscón as a test a few weeks ago and it turned out quite well. I then used dried yeast. 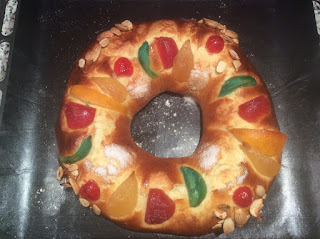 Yesterday I made a second roscón, this time with fresh yeast. 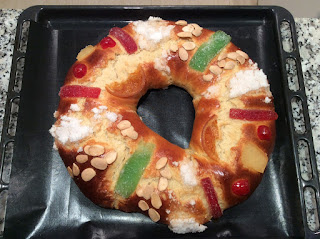 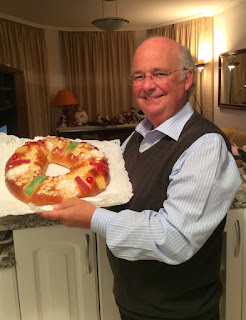