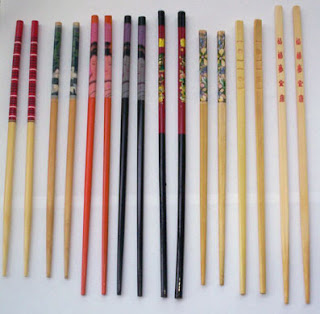 Some thirty-odd years ago I was "into" Bonsai. I had lots of little trees and enjoyed the hobby for several years. During that time, I learned a great deal about plants in general, not just Bonsai, and also discovered the greatest gardening tool ever known to man.

You know, the things with which you eat Chinese food (delicious!). Marilyn Monroe played Chopsticks in her glorious film, The Seven Year Itch, together with Tom Ewell, but that was on the piano and a different story entirely.

The art of Bonsai originated in China, so it is perhaps not surprising that the chopstick has remained linked to Bonsai care. (For a brief history of chopsticks, as well as other information about them, look here and here). From Bonsai I learned that a wooden chopstick could function as an excellent water gauge, dipping it into the soil, removing it after a while, and checking the dampness of the wood. As well as using chopsticks or parts of chopsticks for shaping, separating, and styling Bonsai, they have one use which is particularly suitable to other forms of cultivation: root separation.

When repotting a plant, it is often advisable to clear out the old soil from between the roots and to ensure that the roots are evenly spread in the plant's new pot. This can be best achieved with a chopstick!

Chopsticks come in various sizes and have differently shaped points (the Japanese chopsticks tend to be shorter, more often round along their whole length, and more pointed than their Chinese cousins), so keep a few different ones handy in order to be able to select the most appropriate one for the task. Larger plants with large root masses might benefit from some running water when the roots are being teased loose, but this should not be necessary for plants from normal and small-sized pots. Simply use the chopstick to gently tease the roots loose and to remove the soil which is caught between them: because of the slightly flexible and natural aspect of the wood, the chopstick will fulfil this task admirably and will cause far less damage to your plant than a metal item, such as a fork. Later you can use the chopstick to spread the roots evenly over the new soil before covering them and fixing the plant.

I also use chopsticks to push soil up against cacti stems, to ensure that the soil is well tamped down, though not excessively, at the sides of the pot, to nudge a cactus into its correct position in its new medium, to act as a fixed support for a while until a less than stable cactus has settled down, and countless other ways. Why, only just the other day I used a chopstick to unclog a leaf-sucker (garden vacuum).

I'd still like to have played Chopsticks with Marilyn, though…