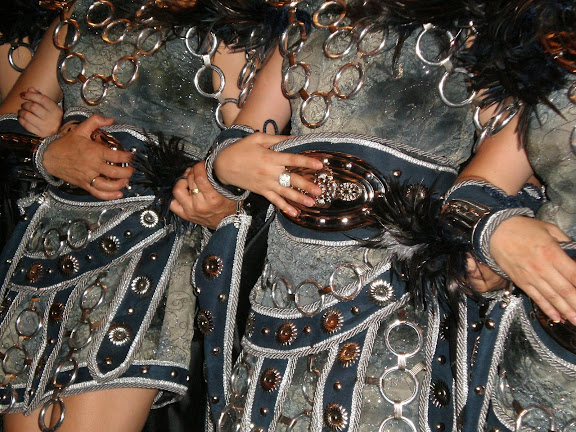 PS And here are some photos taken during this year's Moros y Cristianos parades.
Posted by David at 01:41 No comments: 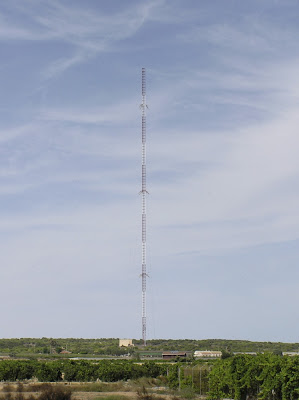 Guardamar will soon have the tallest structure in the European Union. Nothing new is going to be built, however. Indeed, the structure that will merit this praise has existed since the early 1960s, when it was built by the US Navy: the Torreta de Guardamar, a guyed, low frequency, high range radio mast situated just outside the town of Guardamar, in the hamlet of El Campo de Guardamar. Construction of the mast was started and completed in 1962 and the mast served the US Navy until shortly after the first Gulf War. It was then transferred to the Spanish Navy, who has since been operating it under the call sign of "Radio Estación Naval - Antena LF 380 metros - Guardamar". Its main function is to keep an eye on marine traffic in the Mediterranean, with particular attention to the submarine activity (the major submarine base of Cartagena is close by).

So why will this almost fifty-year-old structure suddenly become the tallest in the EU? Well, according to a report in the Independent, the current holder of the record, the Belmont Transmitting Station, in Lincolnshire, is to be reduced in size in order to support a new digital aerial. Belmont is 385.75m tall, but will soon see itself reduced by some 36m. The Torreta measures 370m (the Americans left a notice stating that it is 380m., but Americans tend to see things big and know little of the metric system of measurement, so the mistake is understandable).

Like Belmont, the Torreta de Guardamar is largely ignored by tourists. It is not in the tourist heartland of Spain, of course (though is reasonably close to the overcrowded beaches and urbanisations of the Costa Blanca); furthermore, its huge size is not immediately apparent, as there are few buildings in its vicinity to offer a comparison of scale. Nevertheless, it is an imposing structure if one cares to study it, and can be seen from a great distance (it can be relatively easily seen on a clear day from the El Corte Inglés store in Elche), especially at night, when it is adorned with red warning lights.

I have posted several photos of the Torreta de Guardamar to this Picasa Web Album.
Posted by David at 11:45 No comments: