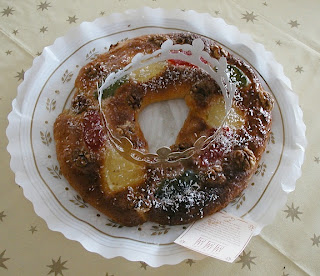 Since before Christmas variously sized, though usually quite large, circular pastries have gradually appeared for sale in patisseries and the corresponding sections of supermarkets. These are the so-called roscón de Reyes, which is a traditional cake, baked for consumption on the afternoon of 6 January, the Day of the Three Kings.

Dough is formed into a circle and decorated with pieces of crystallised fruits of various colours, and is also often sliced and filled with cream or confectioner's custard. In addition, a bean and a porcelain figure are hidden in the cake.

As with almost all traditions related to Christmas, the origin of the roscón dates back to earlier pagan traditions and probably to the Saturnalia, the ancient Roman festival in honour of the deity Saturn. At that time, circular cakes made with figs, dates and honey were distributed equally between both plebeians and slaves. Reports indicate that as early as the third century a bean was hidden in the cake and that the person who received the piece containing the bean was named the King of Kings for a predetermined period of time.

It is only since the twentieth century that the cake has been prepared with a filling of cream, or confectioner's custard, or even cabello de ángel (a very sweet pumpkin preserve). A porcelain figurine, usually representing some biblical character, is hidden in the cake, and the tradition of hiding a bean in the cake also remains, though its finder is less fortunate than in earlier times: now they have to pay for the cake, whereas the finder of the figurine is allowed to wear the crown (usually a paper crown is sold with the cake).

The roscón shown in the photo was bought (and eaten) by us several years ago in an artisenal bakery in Jávea. It was filled with cabello de ángel and was quite delicious.