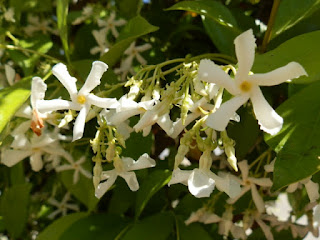 About this time two years ago, I posted an entry about the planting of some new climbing plants to replace a line of Adelfas. The entry was called Jealousy because… well, perhaps you should just read the original post for the explanation.

Anyway, in the intervening two years, the Trachelospermum jasminoides, otherwise known as Chinese ivy, Chinese jasmine, Star jasmine, Jasmin rhynchospermum, and Jasmin rhyncospermum (and, I suspect several other names, as well), have done quite well, especially given the extremes of temperature and lack of rainfall that we experience in this part of Spain.


This week the plants have opened their flowers, so that we now have a sort of scented flowerfall. She Who Must Be Obeyed assures me that the perfume is gentle and pleasant (I have no sense of smell, so, as in all other matters, I must take her word for this and nod obediently); whatever aroma the flowers might have, the plants look very good.


This photo was taken today from much the same spot as the photo that accompanied the original post: 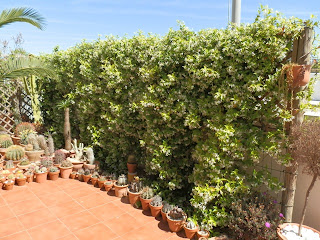 (You will notice that the area in front of the trellis has been tiled in the meantime.)


And, in case you don't remember what that photo looked like two years ago, and/or can't be bothered to go to the original post to see it, here it is: 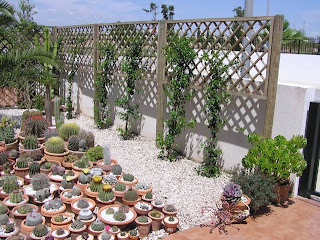