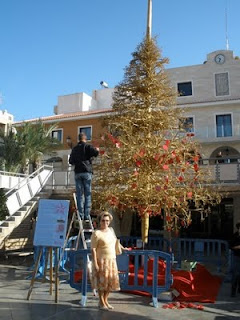 The Guardamar tree has been decorated by over a thousand children from local schools. Each child made a red decoration in the shape of a ball, a heart, or a star, carrying their name. Televisión Guardamar has a short news item about the tree and the children.
Posted by David at 16:44 No comments:

Just a Little Bit of Green 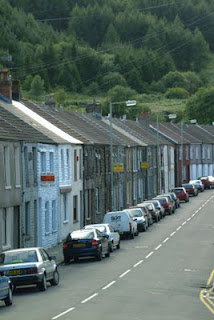 I have just finished reading How Green Was My Valley by Richard Llewellyn.

Given the author's name, the subject of the book, and the renown in which the book is held, together with the fact that I originate from the Rhondda Valleys, I felt I should read the book and would enjoy doing so.

What a strange book it turns out to be, with the author offering a strangely twisted view of life in a coal-mining community around the turn of the 19th and 20th centuries. Llewellyn seems to have the timing of the story all wrong, with lush pastures and clear streams abounding in an area apparently full of mines, but where houses still have to be built along the valley sides. By the time of his tale (never specifically stated, but identifiable through references to Victoria, the Boer War and other temporally confused events), the Valleys were already blackened with coal tips and coal dust and the mine owners had already crowded the floors and sides of the valleys with row upon row of crammed houses (now quaintly referred to as cottages, for some inexplicable reason). The rivers that cut through the valleys were already dead and blackened, unlike the trout-filled, green-sided river of Huw Morgan's valley.

If Llewellyn's timing is off, then his representation of the Welshness of his characters is just as far from the mark. The author's attempt to emulate the way they speak borders on the comical. By the time of the story, little Welsh was still spoken in the Valleys, wiped out by English overlords and the influx of outside workers, yet all of Llewellyn's main characters (and there are many of them) are depicted as doing so through the means of supposedly direct translation into English, which merely results in nonsense: "my little one" is simply no substitute for "bach", but that is just a drop from the ocean of rubbish that Llewellyn pours into his pages of conversational interchange.

The characters themselves are good enough, as is the basis of the story, but the whole is a great disappointment.

But if you're looking for disappointments, try John Ford's 1941 film of Llewellyn's tale. Unbelievably, in 1990, How Green Was My Valley was selected for preservation in the United States National Film Registry by the Library of Congress as being "culturally, historically, or aesthetically significant". The Americans must have a very warped idea of any of those three categories. The film makes a total mockery of Welsh (and, more particularly, Valley) culture, is historical hogwash and aesthetically a bizarre mixture of inaccuracies. Any research prior to the film being made must have been minimal at best: the geography is wrong, the accents are wrong, the houses are wrong, the location of the mine is wrong (at the top of a mountain, would you believe!)… The film is, quite honestly, a load of tat and deserves to be flushed down the great sewer of cinematography, rather than praised as anything significant at all. There seems to be only one genuine Welsh accent in the film (there are Irish, English, American, and, I'm sure, even an Austrian accent), but the owner of this accent, the character Dai Bando, is portrayed as little more than a buffoon, very different from the book's interpretation. The mountains are wrongly shaped, there is even something approaching yodelling at one stage, the houses are like palaces, massive places, quite out of keeping with the reality of the time. The Library of Congress would do better to classify it as a poor parody, insulting to the Welsh, and both culturally and historically inaccurate. Nonsense, the whole thing, and best left to one side.

The book is bad, but the film is infinitely worse. Indeed, the film attempts to condense the ten years or so of the book's tale into what seems to be no more than a year: it is neither convincing nor successful.

A far more accurate depiction of Wales in general and the Valleys in particular, as they were in the first part of the 19th century, can be found in George Borrow's excellent book, Wild Wales. An online version of the book can be found here.

(Thanks to FreeFoto.com for the use of the photo, showing part of Treherbert, in the Rhondda Valley.)
Posted by David at 12:04 1 comment: 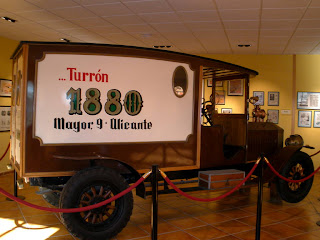 At least the house was still open when we got back home.
Posted by David at 19:31 No comments:

I'm Counting On You… 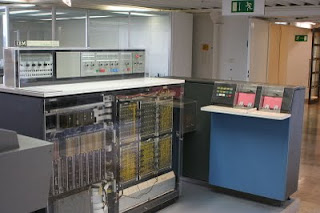 Last night it dawned on me that, not only had I celebrated my 38th wedding anniversary just a few days ago and that I would be 61 years old in just a few days time, but that I had started working with computers over 40 years ago. That's a long time!

When I left school in 1967, I'd had more than enough of organised academia, but for some reason chose to go into the "safe" career of banking. It didn't take me long with bowler-hatted nine-to-fivers for me to realise that I had made a big mistake and so I started thinking about something I had already examined during my time at school: computing. I figured it was something with a future, though was warned by the manager of the National Westminster branch for which I worked (Grosvenor Gardens, I think it was — it overlooked the gardens of Buckingham Palace and was not far from the National Coal Board) that I would become a robot, a machine, and would end up nowhere. Such discouraging words only served to spur me on and soon I became a trainee programmer for what was then Elders and Fyffes and would soon become the Fyffes Group. This was in about September 1968.

Fyffes had an IBM 360 Model 20 computer, housed in a special room, with false floor, air-conditioning and a sort of air-lock entrance. The machine itself had a CPU with 16K central storage (core storage I think it was called, and, yes, you read that correctly — a tad more than 16,000 bytes), three removable hard disks, each of a massive 2.5 megabytes, two magnetic tape decks, a punched-tape reader, an 80-column card-reader, and a stunning 1200 lines-per-minute chain printer (did you get that? 1200 LPM, with each line containing 128 characters). Doing a core-dump really made the paper spew out of that machine!

Fyffes also had some legacy equipment, made up of IBM collators, tabulators, and other -ors I'm sure, which were programmed through plugboards or "control panels" that consisted of a matrix of connectors: using wires, one set up circuits between these connectors in order to achieve the desired result. A sort of hard programming, I suppose. You can see machines of this sort if you got to this page. I made a few programs on these machines whilst learning how to operate the Model 20, but soon moved to the programming department proper, where I learned RPG and Basic Assembler.

The legacy equipment was hardly used, but the Model 20 served to provide all of the sales statistics for the UK, as well as the personnel management and accounting.

Soon Fyffes decided to replace the Model 20 with a Model 30, so a big conversion was required and I also had to learn PL/1, which was a new general-purpose language being touted at the time by IBM (presumably as an alternative, in Fyffes's case, to COBOL). I wrote a few programs in the language, but soon moved, along with several other members of Fyffes DP section, to (take a deep breath) Futcher, Head, Smith and Tucker, a group of accountants in a rather run-down part of London, near Liverpool Street station. It was back to RPG there, working again on an IBM 360 Model 30.