Spain is full of surprises. Unfortunately, it seems that even the Spanish people themselves are largely unaware of the rich variety of their country historically, culturally, naturally and otherwise. Perhaps this is because there is just so much in every aspect that they become flippant. This certainly seems to be the case with the general disrespect of nature, with open spaces sadly filled with rubbish, showing a total disregard for the wonderful countryside. I'm sure that another reason is the dominance of the Catholic church, which has channelled almost all thought to a host of virgins and a never-ending series of processions. Still, that's another matter. Here I want to point out something quite different: the highest structure in the European Union (if it isn't now, it soon will be—in this respect, see my earlier "Looking High, High, High" entry, too.)

Even the local people who live around La Torreta are surprised to hear that it is the tallest building in the EU. "Taller than the Eiffel tower?" is the most frequent response, so here's an illustration to show just how much taller La Torreta is. Incidentally, there are plenty of other radio masts that are taller than the Eiffel tower, though most of these seem to be in Eastern Europe. Still, the Eiffel tower with its 320.75 metres (including its TV mast) is quite a way down the list and is almost 50 metres shorter than the 370 metres high La Torreta de Guardamar.

If you would like to see some photos of La Torreta de Guardamar, please visit my Picasa Web Album.
Posted by David at 13:07 No comments:

Let's Have A Party 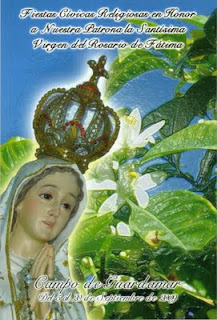 In the north of Europe we have our Patron Saints, such as Saint David (Dewi Sant) in Wales. Here in Spain the patron tends to be a representation of the Virgin Mary (a term originating from a poor translation from the original Hebrew word 'almah, but that's another story). In El Campo de Guardamar, the patron is the Virgin of Fatima's Rosary and she is honoured in fiestas that take place each year during September. This year, these fiestas stretch from 5 until 20 September.

The programme of events is as follows:

13:00 Firing of rockets to announce the start of the fiestas
16:00 Start of domino championship
23:00 Fiesta speech, given by veterinary doctor Julián Huertas Aracil
01:30 Crowning of Fiesta Queens, followed by disco dance, including live group Los Chiquillos

16:00 Bar opens and domino championship continues
23:00 Game shows, including Tú si que vales (something like The Gong Show). Anyone wishing to take part should contact a member of the Fiesta Committee. Also a surprise performance…
03:00 Traditional hot chocolate and La Mata Monas (a sort of cake)

12:00 Open-air mass in Los Limoneros, followed by presentation of flowers in the chapel of El Campo
19:00 Groups accompany the Fiesta Queens and ladies in waiting from the chapel to the start of the carnival
20:00 Colourful carnival parade with three prizes offered to groups of more than 5 people, each of whom will receive a prize. Prizes are offered for:

16:00 Bar opens and final of domino championship
22:00 Dinner and dance; bring your own food, but an aperitif and the wine is provided
23:00 Musical revue

16:00 Bar opens and final of domino championship
10:30 Bikers breakfast: come on a motorbike; each of the first 300 participants will receive a gift bag.
Because of inclement conditions last week (it rained a bit), the Carnival Parade has been postponed to this weekend:
19:00 Groups accompany the Fiesta Queens and ladies in waiting from the chapel to the start of the carnival
20:00 Colourful carnival parade with three prizes offered to groups of more than 5 people, each of whom will receive a prize. Prizes are offered for: