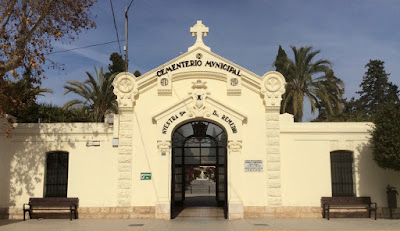 In an earlier post, Three Boys, I described how my friend, Terry Cleverley, had died just a couple of years after having left school. A reply to that post led me to search for and eventually find Terry's gravesite.

Terry Cleverley didn't start his first year at Woolverstone Hall with the rest of the boys. He joined us in the second term, coming, if I am not mistaken, from Singapore, where his father was stationed. Like myself, Terry was then in Orwell House and we soon became friends. In our second year we moved to Corner's House, where we remained for the rest of our time at Woolverstone.

The reply to my earlier post indicated that Terry had died in January 1969. This is incorrect. In fact, Terry died in the early hours of 6 June 1969 as the result of a traffic accident in Benidorm. However, the information that he had been buried in Alicante seemed promising, so yesterday, Elise and I decided to visit the Municpal Cemetery in Alicante to see if we could find Terry's grave.

The Cementerio Municipal, also called Nuestra Señora de Remedio, is located on the outskirts of Alicante, between the town itself and the A70/E15 motorway. Its main entrance is on the small and unpretentious Plaza Cementerio, otherwise occupied almost entirely by florists and stonemasons, with just one small bar for those in need of refreshment.

To the right of the entrance hall of the cemtery is an office, so we went in there to see if we could glean any further information regarding Terry.

The young lady who received us was very helpful and kind. I told her what I knew, which was basically just Terry's name and year of death. With just that information, she searched the digitalised records of the cemetery and was soon able to tell me that Terry had indeed been buried in the cemetery. After some further explanation, we were given directions to the location of Terry's grave. 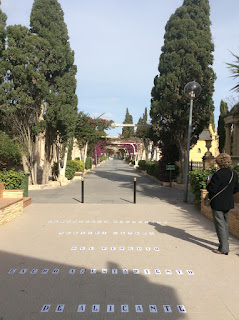 Passing out of the entrance hallway and into the cemetery itself, one is immediately struck by two things: the cleanliness of the place and its enormity. It really is a massive, massive cemetery, but it is also extremely well maintained. Initially, one passes through an area of huge, almost monumental tombs, far too ostentatious for my liking, but still impressive (some small examples can be seen behind Elise in the photo).
This is followed by somewhat smaller tombs of a more "normal" size. Spain being a Catholic-dominated country, crucifixes and other religious symbols are well in evidence. Very few of the gravesites are reserved for a single person and many have whole generations of families, the names of each member carefully inscribed in the stonework, which is almost always marble or granite. 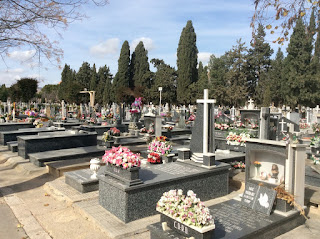 The only date indicated in Terry's records was 9 June, 1969: this was the date of burial. As explained above, Terry was killed in the early hours of 6 June, 1969. He was first buried in his own grave, with a gravestone. The lease for the grave was not renewed, however, so after ten years, Terry's bones were removed to the communal gravesite, known as the Osario or osuary.

After walking some way, we finally came to the Osario, marked by an imposing crucifix.

It has to be said that this part of the cemetery is perhaps the least well cared for. Passing around to the front of the Osario, we could see the irrigation piping sitting on top of very dry soil (it looks as if the irrigation does not work) which is sparsely covered with dried-up vegetation. A few small memorial tablets have been placed here and there, with some photos stuck to the large stone crucifix that is largely hidden behind a poorly positioned yucca. 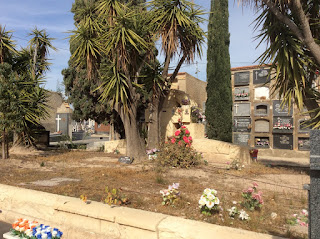 Having seen where Terry now lies, we decided to place some flowers there to at least add a little cheer to the site. We walked back to the Plaza de Cementerio, purchased a colourful bunch and left it lying on the dry soil of the Osario before continuing our walk through the cemetery. 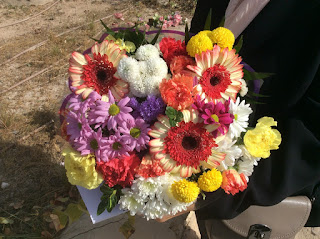 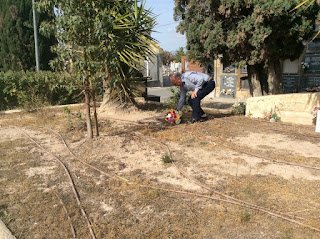 Here are some impressions of the cemetery, which is quite a remarkable place and well worth a visit. It is remarkably quiet and has various sections containing different styles of memorials. The highest point is occupied by a chapel, below which is a shaded green area, provided by a copse of mediterranean pines. What was at the time of the Spanish Civil War a mass grave, now forms a memorial to those Republicans executed by the Nationalists. 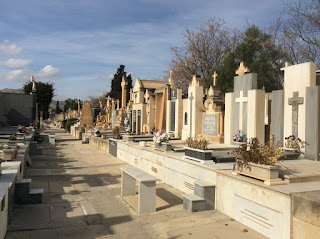 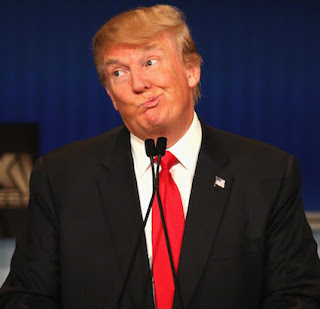 Grow up, Americans, and forget your guns.
Posted by David at 12:36 No comments: