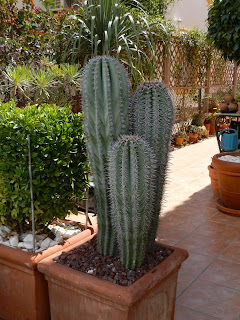 SWMBO and I took our German neighbours to a few garden centres recently. They were looking for a new palm to replace one lost to the dreaded Red Palm Weevil and an alternative to their straggly bouganvilla.

In one of the centres, I spotted a set of three large cacti. Way out of my price range, I imagined, but I went over to have a closer look and to check the price anyway.  It was marked at just 47 euro, which I thought must be a mistake, but when I asked about it, I was told that as it was marked at that price, I could buy it at that price. So I did. (And then I paid more than that for the pot!)

It was delivered a couple of days ago and I wanted to know just what I had bought. As is the wont here in Spain, most garden centres do not mark cacti and are of little help in identifying them, so I placed a pleading post on the Cactus World Online forum and within less than an hour had the name I was searching for: Pachycereus pringlei.

The tallest of the three parts stand 90cm. with an almost unbelievable maximum circumference of 70cm.

As well as the portrait view, you might enjoy a top view of one of the stems and a closeup of an areole with its spines. 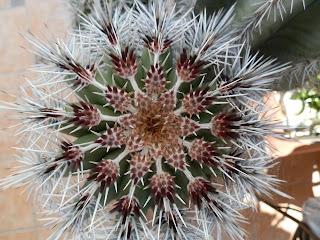 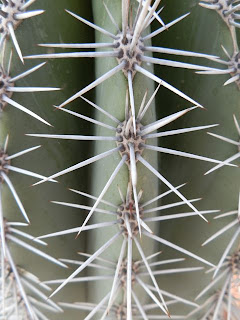 A good buy, I think. 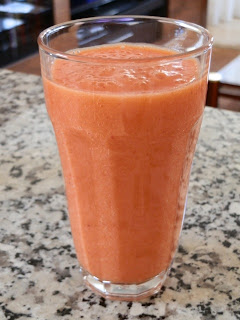