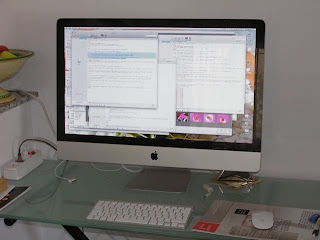 My old one was getting past it for the sort of things that I was doing and it was quite small, too. Easy enough to carry around, but still rather too small for use at home. I wanted to get a new one, but She Who Must Be Obeyed wanted me to get a very big one. I would have been happy with the slightly smaller model, but she insisted that she would prefer me to have a larger one, so that's how the final decision was reached.

As a result, I am now the proud owner of a 27" iMac. A beautiful piece of equipment, if ever there was one, though I have to admit that I still find the screen uncommonly large for my purposes.

I have an old semi-sphere 21" iMac flatscreen upstairs, but my main work was done on a PowerBook, a workhorse that served me very well from 2005. Its PowerPC processor was beginning to get tired, though, so a new iMac seemed just the thing.

Transferring everything (music, photos, texts, applications, etc.) from the PowerBook to the iMac was a doddle. In fact, I made it harder on myself by doing it in two stages: first to a separate account on Elise's MacBook and then from the MacBook to the new iMac. I did this, as I wanted to take the PowerBook to Belgium to give to my mother and preferred using it myself for as long as possible, rather than having to share the use of Elise's MacBook. (My mother? Yes, at 90 years of age she can get along nicely with MacOS X, in the vanguard of the new breed of cybercentenarians.)

So, just before we left Belgium to return to Spain, I transferred the data from the PowerBook to a separate account on the MacBook, then did a clean install of MacOS X Leopard on the PowerBook, then transferred the data from my mother's old iBook, which was still running Tiger, to the PowerBook. I used my account on the MacBook for a week or so, by which time we had returned to Spain and paid a visit to El Corte Inglés in Elche, where the new iMac was purchased. That same evening, MacOS X Snow Leopard was installed on it and the data transferred from the MacBook account to the new iMac.

Apple makes this all very easy with a great utility, called Migration Assistant. A doddle.

The 27" LED screen is, indeed, impressive, especially when viewing photographs and films. I still find it a lot of real estate for programming, text-processing, even surfing the web, but perhaps I'll get used to it.

Anyway, I'm not complaining.
Posted by David at 13:45 No comments: 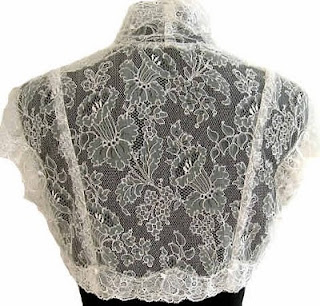