Year Of The Buffoon

Let Al Stewart keep his Year of the Cat (and how many of you remember that?.

This year must surely be the Year of the Buffoon.

Just consider: Nigel Farage, Boris Johnson, and, wait for it, buffoono supremo Donald Trump. What a set of human disasters they represent!

Then add to this sad list the names of the likes of Recip Eroğan, Vladimir Putin, Kim Jong-un, and the ultra right-wing upstarts in Europe.

All you then need are some religious fanatics and you've got a recipe for disaster.

Oh, hang on, such religious fanatics are already present in the USA in the form of fundamentalist Christians (home teaching, anyone? Yes, the world is six thousand years old. I ask you!) and in Europe and the Middle East, Daesh, who claim to be fundamentalist Moslims, but act like no true Moslem would ever act, fill that rôle. (Personally, I think that fundamentalist Christianity, as practised in the USA, is a far more dangerous manifestation.)

Generally, the world seems to be going to pot, with ultra right and fundamentalist viewpoints gaining way too much ground, as people look for simple solutions to relatively minor problems that are blown up out of proportion, as a way of gaining support for extremist ideas and movements.

I had intended on writing rather more on this subject, but came across an excellent article that really says all I have to say, so rather than read my drivel, please take the time to carefully read Brian McNair's When Terror Goes Viral It's Up To Us To Prevent Chaos—it says it all.

(But just to finish, can you really imagine Trump as the president of the USA?)
Posted by David at 11:49 No comments: 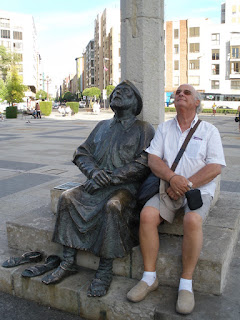 La Granja (gardens and fountains)
Posted by David at 12:12 No comments: