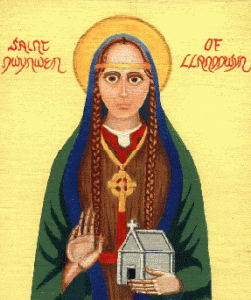 Saint Dwynwen’s day (Dydd Santes Dwynwen), 25 January, is celebrated in Wales in much the same way as Valentine’s day is elsewhere. So this year, celebrate your love for someone in a truly British fashion with a "Happy Saint Dwynwen" or, even better, a "Diwrnod Santes Dwynwen Hapus!"
Posted by David at 17:47 No comments: