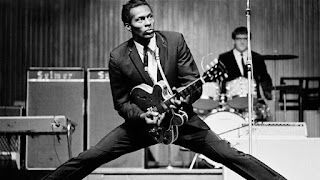 Some twenty-five years ago on a Macintosh Plus, I created a HyperCard stack (remember those?) called Chuck's Intros. It was a little quiz in which the user had to identify recordings made by Chuck Berry, based on a few bars of his guitar intros. Not too many people seemed to care about Chuck Berry back then, but I enjoyed using the stack from time to time as a way of sharpening my own recognition of his wonderful intros.

I had been a Chuck Berry fan for a long time. I still am. I have no idea how I discovered him, but I knew him before the Rolling Stones released Come On back in the early 1960s. I expect I got to hear of Chuck because of my liking of Elvis Presley, Fats Domino, Buddy Holly, Jerry Lee Lewis and everything else Rock and Roll. Holly recorded Brown Eyed Handsome Man, of course, so that might have been my introduction, trying to figure out the intricate lyrics. What with witness stands, the Milo Venus and references to baseball, I was at a loss!


Chuck Berry was the Shakespeare of Rock 'n' Roll, the Bard of the Beat; no other songwriter was quite able to match Berry's masterful ability to summarise in a few verses and with brilliant phrasing the hopes and wishes of youth. Nobody wrote lyrics like him. And they just seemed to flow effortlessly, despite their clever rhymings, unusual settings, and occasional strange words.

Chuck's personal life might have been somewhat questionable (though much of the allegations against him were very likely racially based), but his music was simply wonderful: Carol, Little Queenie, Sweet Little Sixteen, Memphis Tennessee, Roll Over Beethoven, School Day, No Particular Place To Go, You Never Can Tell, Brown Eyed Handsome Man, Johnny B. Goode, Promised Land… and many, many more. I still have well over a hundred of his recordings in my iTunes library. (It is rather unfortunate, however, that he seems to be as much remembered for his one really rubbish number, My Ding-a-Ling, as he is for the rest of his catalogue. Still, he seemed to enjoy playing the number live, so who am I to judge?)

I read his autobiography shortly after it was published and enjoyed it greatly. If you're interested in his real story, you might wish to try to find a copy for yourself.

Above all, keep enjoying his music.
Posted by David at 11:45 No comments: