All Quiet on The Belgian Front 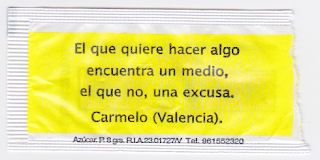 We were back in the hospital today to have a chat with the surgeon who performed the operation on Elise last week and then to have the staples removed. All fine; no complaints.

We had a cup of coffee there after having had Elise de-stapled and cleaned up. The packet of sugar came with a good message again: "El que quiere hacer algo encuentra un mediao, el que no, una excusa."

That translates to "He who wishes to achieve something will find a way; he who doesn't will find an excuse."

Makes me think of all the foreigners here who still can't speak Spanish after having been here for several years: they, too, find plenty of excuses. Agreed, it is difficult to learn a foreign language when you are not actually living in a country in which that language is spoken, but when you are surrounded by millions of native speakers…

Anyway, to eliminate all possible excuses, there's a great new free way to learn Spanish, wherever you are in the world. It's called Say Something In Spanish. Of course, it's not a miracle course and some effort will still be required, but it's by far the best way that I know of learning a language without actually immersing yourself in the language.

If you understand Welsh and you'd prefer to learn through a Welsh medium, simply go to Say Something In Spanish Cymraeg and you'll be in your element. (This is also a great way to practise your Welsh, of course!)

Oh, and if you want to learn Welsh, then try Say Something in Welsh. Ardderchog!
Posted by David at 21:57 No comments: 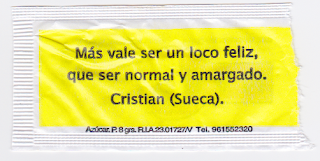 We received a call from the hospital last Wednesday to tell us that Elise could go in for her hiatus hernia operation on Thursday, instead of Friday. As a result we were up far too early on Thursday morning in order to be at the hospital by seven-thirty and by eight-thirty Elise was in a bed, being wheeled in the direction of the operating theatre.

All went very well. Amazing, really, just five small cuts, three of about half a centimetre and to of about a centimetre. Elise was walking around on Thursday afternoon and we were back home by Friday evening.

I stayed at the hospital, too, and whilst there I ate at the restaurant. Excellent food and excellent coffee. The sugar that comes with the coffee is provided in paper sachets and each sachet carries a little piece of wisdom. The one shown here reads, "Más vale ser un loco feliz, que ser normal y amargado." This translates to "It is better to be a happy fool than normal and bitter."