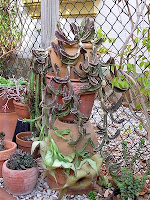 As for other flowers, well, there is a whole host of them, mostly at the extremities of the longest branches. I have counted no less than seventeen, either in full bloom, in bud, or already drying up. And there are plenty of new shoots, too, promising a good year to come for the Stapelia grandiflora.
Posted by David at 19:00 No comments: 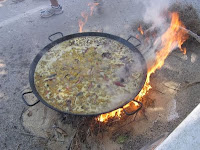 Sunday saw the annual Paella-making competition in El Campo de Guardamar, part of the San Isidro fiestas of that hamlet of Guardamar del Segura. Anyone can take part in the competition, but you have to be able to make a paella in the open-air, using a simple wood fire, with the paella dish supported on a tripod-like affair over the fire.

Many of the paellas thus prepared are very large, sufficient for twenty people or more, and are prepared by teams; others are much smaller efforts, some even prepared by just a single person. The size is irrelevant; the finished paella is judged purely on taste.

This year some twenty paellas were made. These are prepared in the street, the fires being built on a thick layer of sand, which protects the underlying tarmac. (When I was in the UK recently, I was explaining the procedure and a British person took umbrage at this, loudly proclaiming that the EU wouldn't allow such a thing in the UK, but that anything goes in the rest of Europe. It has absolutely nothing to do with the EU, of course, and depends solely on local ordinances, but the British always know best, don't they?) Exploding rockets are used to announce the significant moments in the competition, such as when the fires can be started, when the first ingredients can be put into the pans, when the rice can be added, when the paella must be completed…

The whole thing proceeds remarkably well and the spectacle of twenty or so paellas bubbling along on top of sometimes roaring little fires, with cooks and helpers buzzing around, carrying and adding various ingredients, tasting, commenting, encouraging, and so on, is enjoyed by several hundred visitors.

At the appropriate signal, the paellas are removed from their fires and a small portion of each is placed on a plate to be taken to the judging table. Needless to say, the judging committee includes the local priest—anything for a free meal—and rumours of corruption are rife, but only add to the fun.

As the judging takes place, the paella-makers and their supporters sit down to a highly disorganised but well-deseved picnic meal that, in spite of the lack of organisation and co-ordination, is thoroughly enjoyed and provides a wide variety of foodstuffs to accompany the star of the show, the paella itself.

Our own group prepared a most delicious paella, far better than our effort of last year, when we came second. This year we were not even placed!

If you'd like to see photos of this year's event, then visit my Picasa album.
Posted by David at 15:09 No comments: