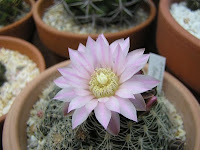 This is the first Gymnocalycium in my collection of cacti to flower this year.

The Gymnocalycium bruchii is also known as Gymnocalycium lafandense and originates from the La Falda mountains, part of the Sierra de Cordoba range, in Argentinia, where it grows in rock cracks at a height of about 2000 metres.

It's an easy Gymnocalycium to grow and to propagate and, like almost all Gymnocalyciums, produces beautiful flowers. And as you can see from the second photo, there are plenty of flowers to come: 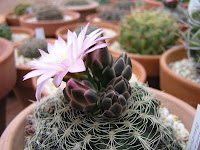 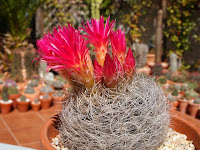 It looks impressive, but what is it? At first I thought it might be a Neoporteria senilis (Eriosyce senilis), but I have a feeling that it is too large for that: it has a diameter of 10 cm and a height of 6 cm. It certainly has the nestlike spine structure of an Eriosyce nudus (another alternative name) and, while almost all of the spines are white, a few are brownish-black.

If anyone can help identifying this cactus, I would be most grateful.
Posted by David at 13:15 2 comments:

Pumpkins, one month on 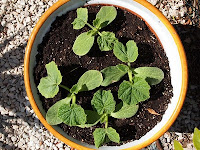 What a difference a month makes.

If you remember from a previous entry, I had put some pumpkin seeds in pots in the hopes of not having to cart any more of the fruits back from Belgium. They had already germinated and seemed to be getting along well. A couple of weeks ago, I was able to transplant the seedlings to larger pots: four were put together in a very large pot, 43 cm diameter by 35 cm tall, while the remaining five seedlings were spread out in smaller pots.

Eight of the seedlings, including the four you see here, continue to do well, but one seems to be struggling a bit; the runt of the litter, no doubt.

I have no idea if this is considered to be a good way to grow pumpkins, but it's worth a try. Each pot has a bottom layer of lava stones, to promote drainage, with a soil mixture of horse manure and potting compost.
Posted by David at 12:56 No comments: 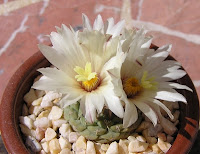 The first flowers have appeared on the cacti, led, a couple of weeks ago already, by members of the Echinofossulocactus genus, together with Mammillaria. Now, others are in bud, notably a number of Gymnocalicium, whose flower display is always something wonderful. Plenty of succulents, other than cacti, are also flowering. But this week the tiny Turbinicarpus schmidickeanus (?) has come into flower.

The cactus itself is a tad less than 3 cm. in diameter and less than a centimeter tall. It produced five buds, three of which open up in the sunlight to produce a bunch of flowers, the size of which overshadows the body of the cactus.
Posted by David at 10:08 No comments: 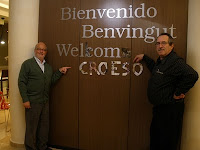 Hotel Quino, in Guardamar del Segura, recently reopened after renovations. In the reception area, facing the guests as they enter the hotel, is a panel on which Welcome is written in three different languages, Castillano (commonly referred to simply as Spanish), Valencian, and English.

Ever since I first saw this panel, I have been kidding Joaquin and Javier, the hotel owners, to place a real language, namely Welsh, on the panel, too. And She Who Must Be Obeyed has gently suggested that a slight modification to the English lettering would turn it into what for her would be much more acceptable Dutch.

A few days ago, we picked up some people from Alicante airport and took them to the hotel. Imagine our surprise, when we were met with a Welcome panel which included our requested modifications: Javier had spent the afternoon cutting shapes of letters from magazine pages, in order to adjust the English Welcome into the Dutch Welkom and to spell out the word Croeso (Welcome in Welsh).

Sadly, the modifications to the Welcome panel were only of a passing nature, and it is now back to its three-language poverty. A nice gesture, though, and one that was much appreciated.
Posted by David at 09:44 No comments:

According to my watch, it's 29 February today.

In reality, of course, it's 1 March, better known throughout the world (!) as Saint David's Day, equivalent to the Welsh national holiday, though, thanks to a rejection by the English-dominated UK government in 2007, no bank holiday is allowed on that day in Wales.

The day actually commemorates the death of Dewi Sant. Old Dewi died on 1 March, probably in 588.

To celebrate Saint David's Day, we had a lunch of caldo con pelotas, which is the Spanish equivalent of faggots and peas, my officially designated National Dish of Wales. The Spanish version uses chick-peas instead of green peas and lemon-juice is used instead of malt vinegar, but I'm not complaining, as I enjoy the dish very much!

My wish for this Saint David's Day is that Wales and Scotland become independent and prosperous members of the European Union (with Northern Ireland returned to Ireland, where it belongs), and that England become a small and unimportant state of the USA, which it clearly wants to be; perhaps it could be renamed Old England to avoid confusion with the already existing state of New England.

Oh, and perhaps we could change the national anthem from Hen Wlâd Fy Nhadau to Dafydd Iwan's Yma O Hyd.