I've had a beard since 1991 or thereabouts, so just about twenty years. Not that it was ever much of a beard, more a sort of designer stubble, with the emphasis far more on stubble than designer. After much complaining by She Who Must Be Obeyed, who insisted that the beard had become too white, it was removed a couple of days ago.

Now there's this strange man staring back at me whenever I look in the bathroom mirror!

He has jowls. He has a turned-down mouth. He has strange contours in his skin. He has a sagging neck…

Twenty years of gradual physical change, nay, deterioration, had clearly been subtly and effectively camouflaged by that minor hirsute appendage, unassuming though it was.

So here's a warning to all who are considering the removal of facial hair after numerous years: think carefully of the consequences before putting blade to skin! Will you be able to face the end result?

As for me, I shall remain clean-shaven, at least for the duration of the electric razor that I bought especially for that purpose. It would be a shame to waste the money, after all.

Last year I bought an Adenium obesum, which I found hiding amongst the more mundane plants of a market stall in Guardamar. It was a lovely plant and produced numerous flowers, a real sight to see.

Sadly, my lack of knowledge about this type of plant, perhaps coupled with a surprisingly hard winter, meant that I discovered a few months ago that the caudex or fat stem of Adenium had turned to an unpleasant mush and the plant had to be consigned to that great greenhouse in the sky (if you believe in that sort of thing). 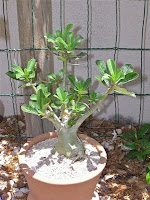 After some searching, the Lady of the Market Stall was able to find me another Adenium some weeks ago. It was clearly a different type, but that's not a problem at all: it's a nice specimen with a good caudex and some pleasant high roots that lift out of the potting medium. It lost most of its leaves shortly after I repotted it, but has now regrown most of them and is starting to look very attractive again. 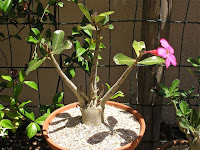 A couple of weeks later, Our Lady of the Market Stall had another Adenium and wondered if I'd be interested. Of course I was! Adenium 3 has a less interesting caudex, but does possess a pleasant trident-like symmetry. Again, it lost almost all its leaves after having been potted up, but these are now growing back and it has even produced a very nice flower, so seems to be doing well.

Neither plant yet matches up to the glory that was Adenium 1, but there is plenty of time yet. This coming winter I shall ensure that the two Adeniums are kept dry and, should the temperature here ever drop below five degrees again, will protect them from such extremes.
Posted by David at 17:29 No comments:

When a woman reaches a certain age, she doesn't like that age to be broadcast either in the intimacy of close friends, or across the World Wide Web. Today is Elise's umpteenth birthday, but to save myself from any hostile reprisals, I shall not reveal the full count, save to say that it is more than 61 and less that 63.

Here in Spain people don't just "have a birthday"; instead, they "complete" a certain number of years. Let's imagine the hypothetical case of someone who is 62 years old today: it's their 62nd birthday, we would say, whereas a Spaniard would complete their 62nd year. A vastly more sensible approach in my view, as from then on a Spaniard is well aware that he or she is in their 63rd year. In cooler climes we tend to think that we are in our 62nd year, thereby cheating Old Father Time of a perfectly good year. You know the sort of thing, "He died in his 62nd year," when he was really in his 63rd year. No problem with that in Spain, where he would quite merrily die when he still had to complete his 63rd year.

Anyway, Elise, happy birthday to you, however old you are…

¡Feliz cumpleaños, mujer!
Posted by David at 21:27 No comments: 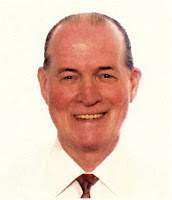 We have just returned from a quick visit to Belgium. We went there to attend the cremation of Roger, a friend of almost forty years, who died very suddenly in his own home at the age of seventy-two.

It is the first time that I have felt so close to death, perhaps because Roger and his wife, Christiane, were the first friends Elise and I made when we were just married. We were living in a small apartment in Aalst, with no room for a washing machine and nowhere to dry wet things. We asked around and found Roger and Christiane, who had their own laundry business. They collected and delivered the laundry and were amused to see that we were not alone in the apartment, but shared it with a budgerigar, Joey, who was allowed to fly freely through the place (he had a cage, but chose when and when not to use it himself). Joey could also talk and do tricks, so Roger and Christiane asked if they could bring their young daughter, Martine, to see the bird.

And so a friendship was formed that has lasted until now and each couple has seen the other grow older and face the good and the bad times that come and go in a lifetime. Now, suddenly, Roger is no more.

The cremation was held at the Westlede Crematorium in Lochristi and was an intimate and moving occasion. The service was followed by a meal that Roger would have been proud of and then we watched as Roger's ashes were scattered over the grass.

Each person who attended the cremation was presented with a commemorative card carrying Roger's photo on the outside, and inside his name, dates of birth and death and this simple yet moving verse:

I offer this transaltion, my own, for those of you who do not understand Dutch:

Now you have gone
and left me only emptiness
I silently suspect
that you are still here…
that I can still hear you
and can still speak to you…
for not even death can break
all the love there was.

Have You Got The Balls For It? 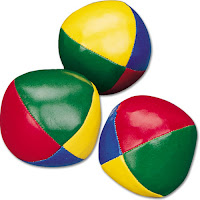 I have always been fascinated by jugglers: their ability to move objects through the air from one hand to another with apparent ease, such objects including not merely balls and clubs, but knives, flaming torches, chairs and even working chainsaws.

I started juggling myself in the early 1990s, when there was quite a popular interest in the art and juggling equipment could be purchased with relative ease. I taught myself numerous three-ball tricks and was also able to juggle with rings and clubs, though never quite made it to switched-on chainsaws.

She Who Must Be Obeyed tried juggling, but she didn't have the balls for it.

I still have numerous juggling balls, including a set of fluorescent ones: leave them in the light for a few hours and then they light up as if by magic when one juggles in the dark. I also still have my clubs and I think there is a set of rings back in Belgium. I was never very keen on rings, I must admit, much preferring the wide variety of tricks that could be easily practiced and performed indoors with three juggling balls: shower, cascade, cathedral windows, tennis… The most complicated trick I managed to master was one called Mills Mess.

People often ask me what it's like, juggling, and I can only reply that it has its ups and downs…

I used to carry my juggling balls with me on my various trips and so have juggled in Belgium, Wales, England, France, Spain, and the USA, where I was able to juggle on the stage of the Overton Park Shell, the site of Elvis Presley's first public performance as a recording artist.

I continue to enjoy the occasional juggle and like reading about it and watching tricks. Plenty of excellent jugglers doing their thing can be viewed at Juggling TV. Believe me, I am nowhere near their class.

Should you wish to learn how to juggle, then take a look here. A simple three-ball cascade is really not very difficult and starting off can cost very little money. Indeed, you can use ordinary balls to start with, though then I would advise juggling against a bed (I kid you not) to avoid running about all over the place chasing dropped balls. As long as you have more than the average number of hands (you need 2, think about it), then you should be fine. There are plenty of other juggling resources on the Web, just Google the word "juggling" and be amazed. And if you'd like some juggling software for your Mac, iPad, iPhone, or Windows machine, then the Internet Juggling Database offers a fairly comprehensive list.
Posted by David at 14:16 No comments: