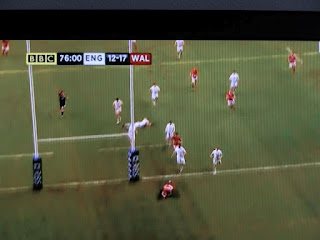 Two more matches left for Wales, who are now in with a very good chance for the Championship and, France permitting, of the Grand Slam, too.
Posted by David at 19:04 No comments: 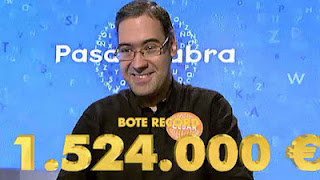 One of the best quiz programmes on Spanish television is Pasapalabra. It used to be transmitted by Antena 3 and was then better than its current incarnation on Telecinco: like most things nowadays, it has been dummed down to be more "entertaining" in the earlier part of the programme.

Fortunately, however, the significant last part of the quiz has remained just as interesting and exciting as it was: two contestants have each to provide one-word answers to as many as possible of 25 questions in a very limited time (usually about two and a half minutes, the total time being determined by success or failure in word games in the earlier part of the programme). The questions can relate to anything and everything: language, geography, history, physics, natural history, cinema, mythology, literature… In fact, an enormous general knowledge is required to complete the task and this rarely happens. However, if all 25 questions can be answered correctly in the limited time allotted, then the successful contestant is rewarded with the jackpot, a monetary amount that is increased by 6,000 euro each day.

Last night, César Garrido, a 34 year-old bachelor from Cuenca, raced through his questions and answered everything correctly with plenty of time to spare. As a result, he won 1,524,000 euro, the second largest jackpot in the history of Pasapalabra and the biggest jackpot ever won on Telecinco (in 2006, when Pasapalabra was still on Antena 3, the contestant Jaime Cantizano won no less than 2,190,000 euro).

Most contestants struggle to approach 15 correctly answered questions. César had already appeared on 29 consecutive editions of the programme (the better of the two contestans of one day wins 1,200 euro and returns the following day to fight again) and on no less than 20 occasions he was able to answer 20 or more correctly.

A more worthy winner than César is difficult to imagine: he lost both his father and his brother early in his life and suffers from a bone marrow disease that has meant he has had to undergo numerous operations. Nevertheless, he is a qualified teacher of English, a task he exercised during ten years, before becoming the correspondent for culture and sports for a daily digital newspaper in Cuenca. César intends to donate part of his winnings to the investigation of bone marrow diseases and also hopes to be able to do some travelling. As a lover of the cinema, he particularly wants to visit Hollywood.

Well done César!
Posted by David at 12:25 No comments: 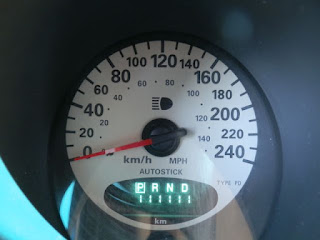 We were driving into Guardamar yesterday and had taken some paper and cardboard with us to put into the appropriate container on the way (you do sort your rubbish, don't you?). There are containers for different types of rubbish just near the exit of El Raso, so I parked the car next to them. As I was switching off the ignition, I noticed the kilometre counter.

Well, you might not understand the binary numbering system, but you use it in some way every day, I'll bet. Just about everything is digitised nowadays, from the mobile phone (oh bane of my life), the lowly weather station, the kitchen scales (assuming their not a decent set of analogue ones), the mp3 player, the iPad, iPod, iWhatever, to the now common-or-garden home desktop computer, and even the CERN supercollider.

Yup, they're all based on just two numbers, zero and one.

All computer technology relies on what are basically no more than switches that can have one of two states: on and off, or, one and zero (and sometimes even "yes" and "no"). And with these two digits, any other number can be formed. Okay, you're used to using ten digits to form numbers, 0, 1, 2, 3, 4, 5, 6, 7, 8, and 9. This is the decimal system, but there are other numbering systems out there, the best-known being octal, hexadecimal, and binary.

So, how does binary work? Simple!

First, a quick look at our normal decimal system to understand how we count. We start at 0, meaning nothing, then we go 1,2,3… up to 9, but when we want to go further, we have no free digits, so we say something like, "Right, I now have one lot of ten, so I'll put down a 1, and nothing else, so I'll put down a 0," giving us 10. We then continue up to our next change from 9 to the next number and have to say, "Now I have 2 lots of ten and nothing else,"which gives us 20.

And when we run out of digits for the "tens position" all we have to do is start a new position for the hundreds and so on.

Now, if we look at a decimal number, say 563, then it can be broken down as follows:

Add them up and you get the full number. In fact, the position of the digit, counting from right to left, indicates the "power" of the "base number" of the system. The base number of the decimal system is ten. This is how all number systems work.

Applying this to the binary system (whose base number is 2), then the decimal equivalent of 101 binary is:

Add them up and you get decimal 63.

(Sadly my car counts in decimal, not binary, so I must accept that it has been driven 111,111 kilometres and not just 63.)

To explain exactly how these ones and zeroes become transformed, not just into decimal numbers, but also into letters, symbols, colours, sound, and everything else digital, would take a whole book, even though it is really quite simple. Believe me, it might look impressive, but its all just ones and zeroes. 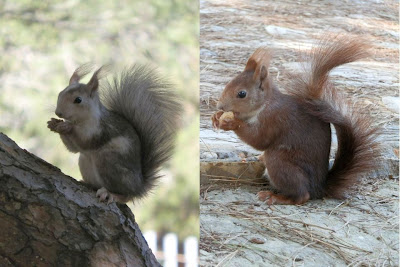 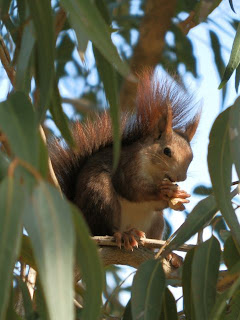 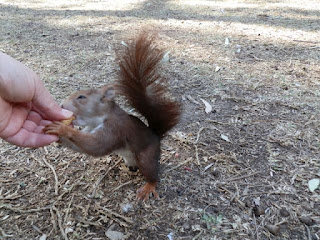 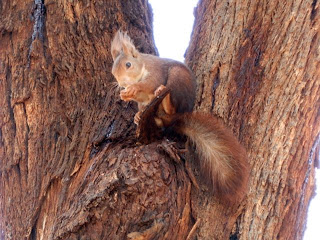 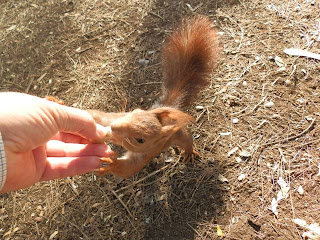 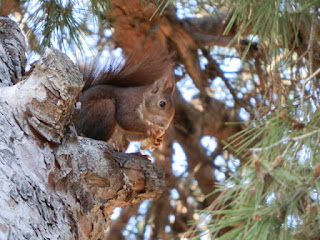 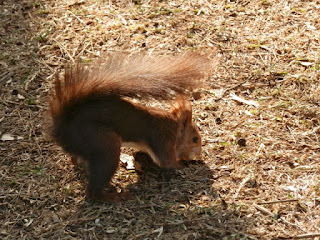 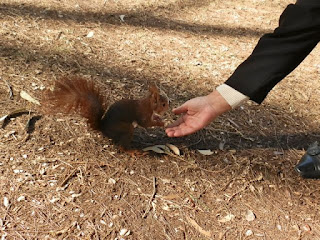 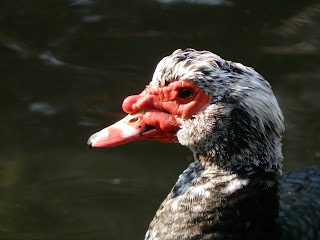 Not for me, you understand, as I am hirsutely challenged and haven't visited a hairdresser for twenty years or more.

No, for She Who Must Be Obeyed, who insists on visiting the hairdresser every week on Wednesday morning.

The hairdresser is in Guardamar, so the visit is not for nought and allows us to have a look at the Wednesday street market, where I occasionally come across an interesting cactus, to pop into Hotel Quino for a morning coffee and chat, and to have a walk around. The latter often involves going through the parks: while SWMBO is in the hairdresser, I walk through the Alfonso XIII park and afterwards we walk through the more formal Reina Sofía park. The latter park has numerous half-tame creatures, other than the children that frequent the play-areas out of school-term time: squirrels, peacocks, swans, and a good selection of ducks.

The first photo in this entry was taken last week and I liked it so much that I thought I'd take a few more duck shots today. The weather was fine. The peacocks tails have almost fully developed, so they will soon be displaying to their hens; the squirrels were as frisky as usual; the ducks were in fine fettle.

We were surprised to see one duck with ten little ducklings, perhaps the first of the season. They were very lively, inquisitive and chirping away.

I can't help you with the identity of the ducks, I'm afraid, but I hope you enjoy these duck portraits.

After our walk throught the park, and before our walk along the front in Guardamar, we went to have a midday meal at one of the Chinese restaurants in the town. She Who Must Be Obeyed is particularly partial to the crispy roast duck with ginger, but she passed on that dish today in favour of beef and vegetables… 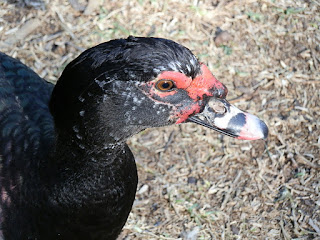 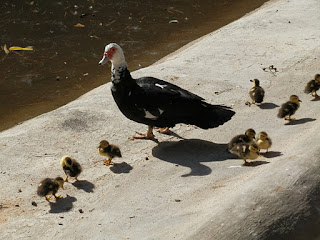 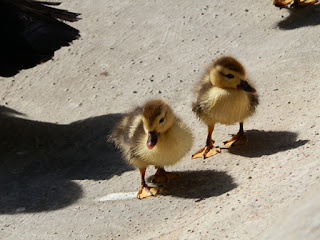 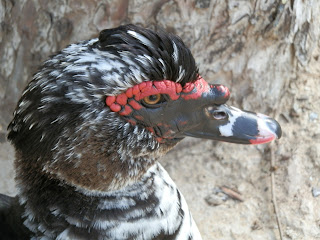 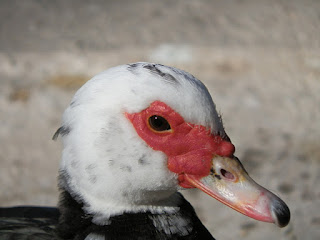 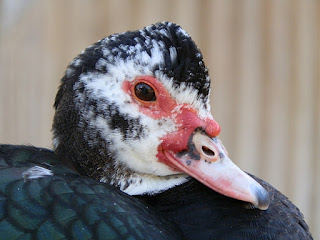 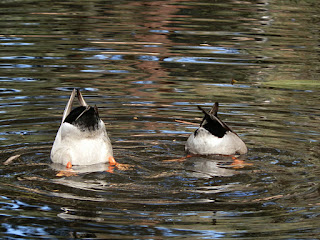