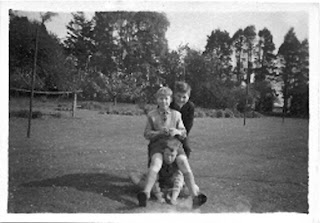 The photo must have been taken in 1962. The boys are wearing shorts and the first- and second-form tie design is clearly visible; the location is the back garden at Corner's House, where the three boys boarded during most of their years at Woolverstone Hall. (Corner's was named after its first housemaster; it was designed in 1901 by Sir Edwin Lutyens and is now better known by its former name, Woolverstone House.) The year before, we were all in Orwell House and the year after we had graduated to long trousers and diagonal stripes on the ties.

Looking from top to bottom, we see Colin, Pip and Clevs.

Pip (Philip) died just a couple years after we left school in 1967. I did not know this until just a few years ago and it came as a terrible shock. He was a fine boy, friendly, well-mannered, clean. He died of leukemia. Far too young. Quite unfair that such a person should have no chance at life.

Clevs was my best friend. Terry. His grandmother lived close to where I lived in Charlton. One day I was in the kitchen of the corner house in which I lived and I saw her through the window, walking past the side of of the house. I knew exactly what she was coming to tell me: Terry was no more. He had been killed in a traffic accident in Spain. This was about mid-1969, as far as I can recall, no more than some eighteen months after we had left school for the final time. Terry fancied being an oceanographer. He never had a chance.

Colin is still alive, thank goodness. The boy who took the photo left school early, as his parents had decided to settle in the antipodes. Soon, more than 48 years after the photo was taken and some 45 years after they last saw each other, Colin and the early leaver, Australian author Alan Gould, will meet again on a beach in Australia.

Pip and Clevs will be there in some way, too.

The date given by ExWoolverstonianToo (see Comments) for Terry's death is incorrect. For more information, see Closing the circle.
Posted by David at 19:05 2 comments: