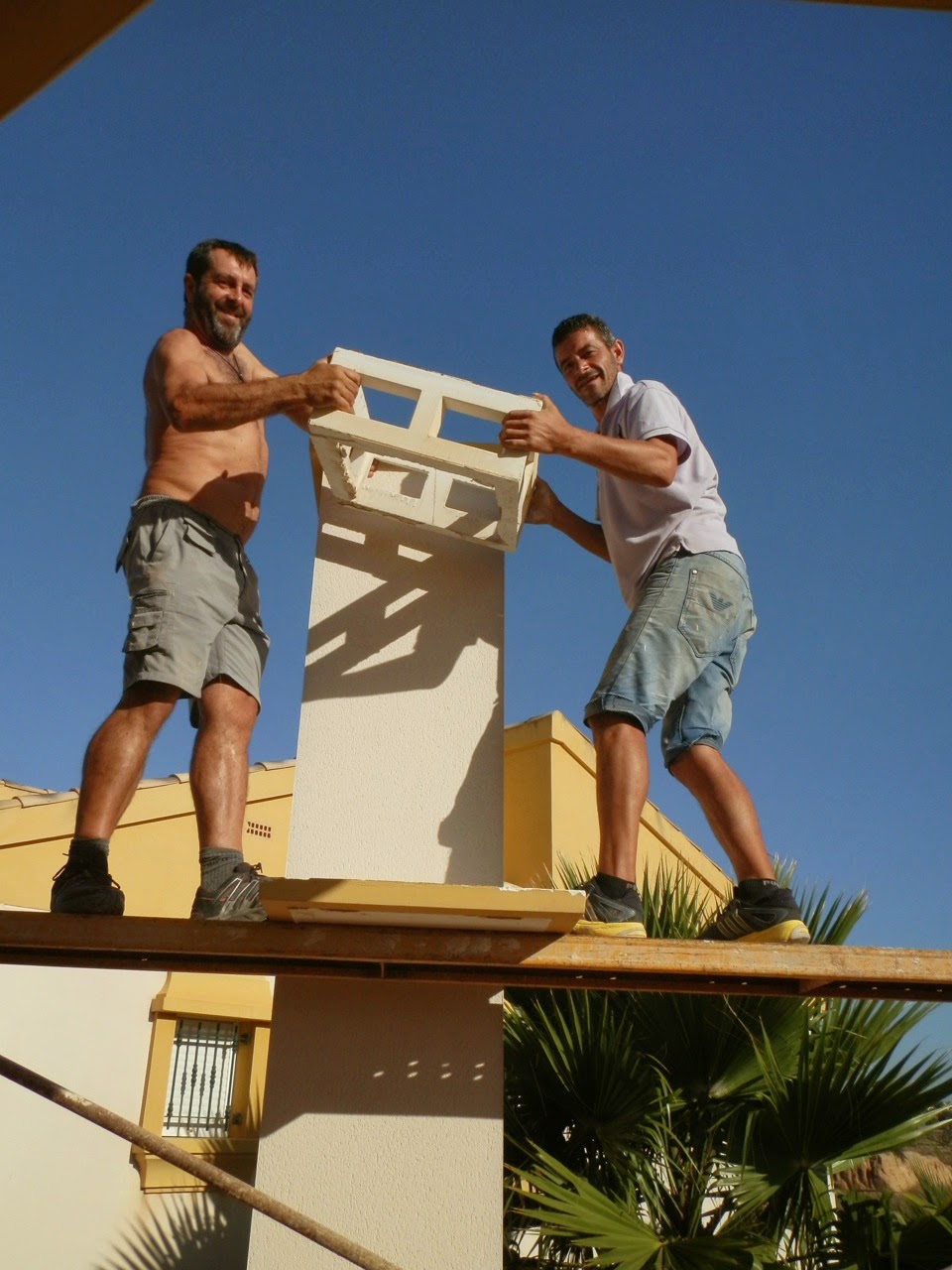 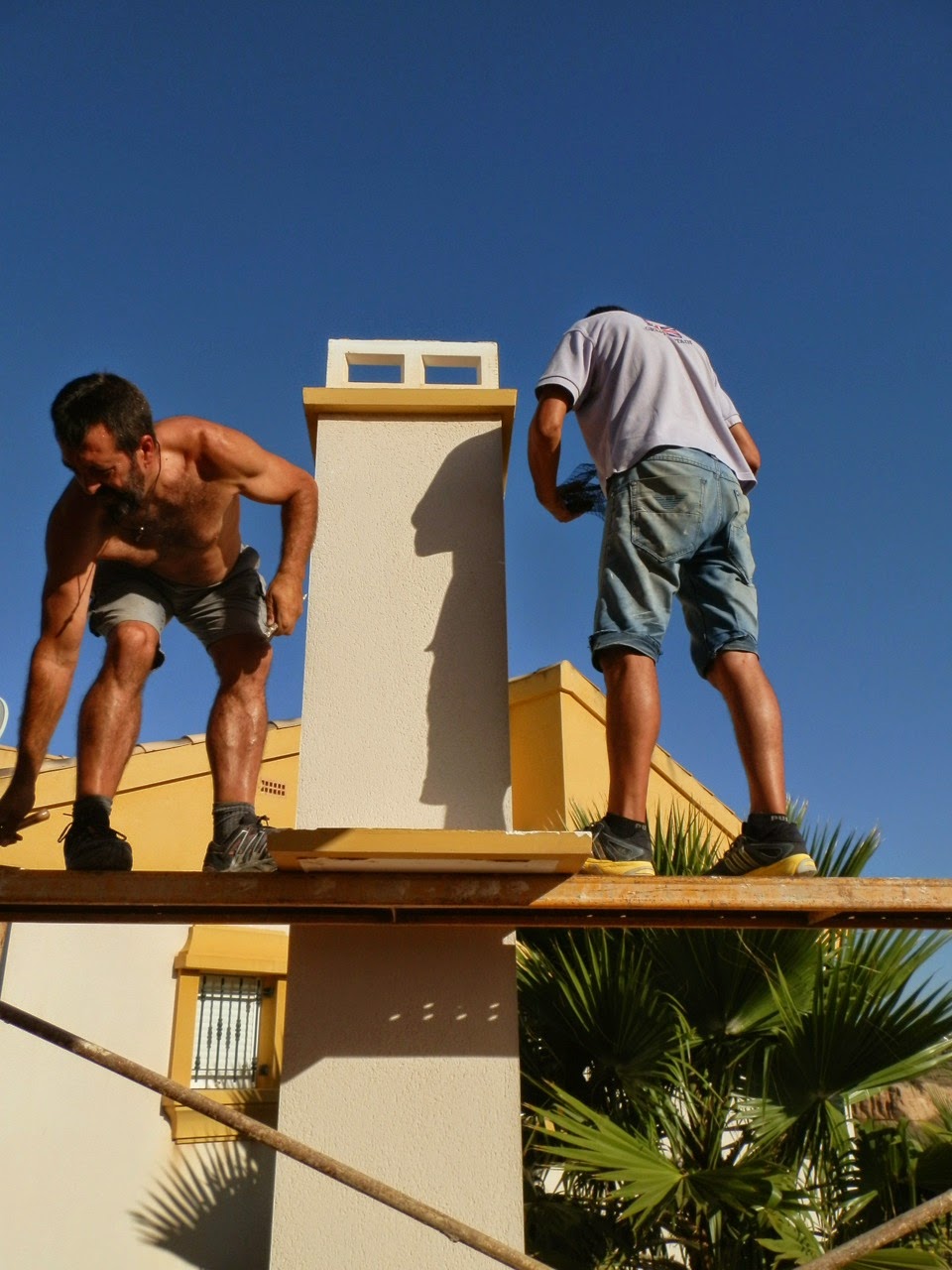 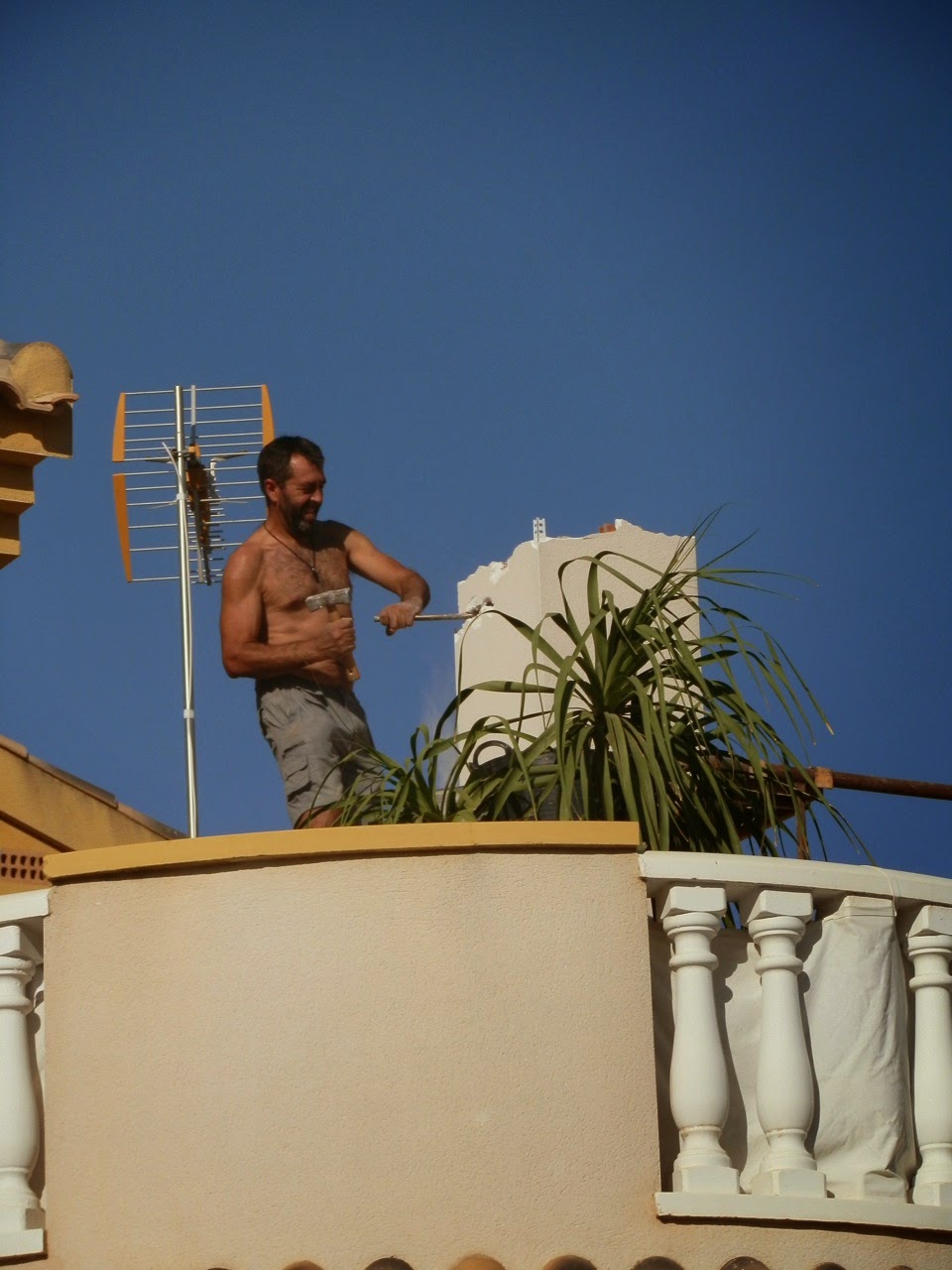 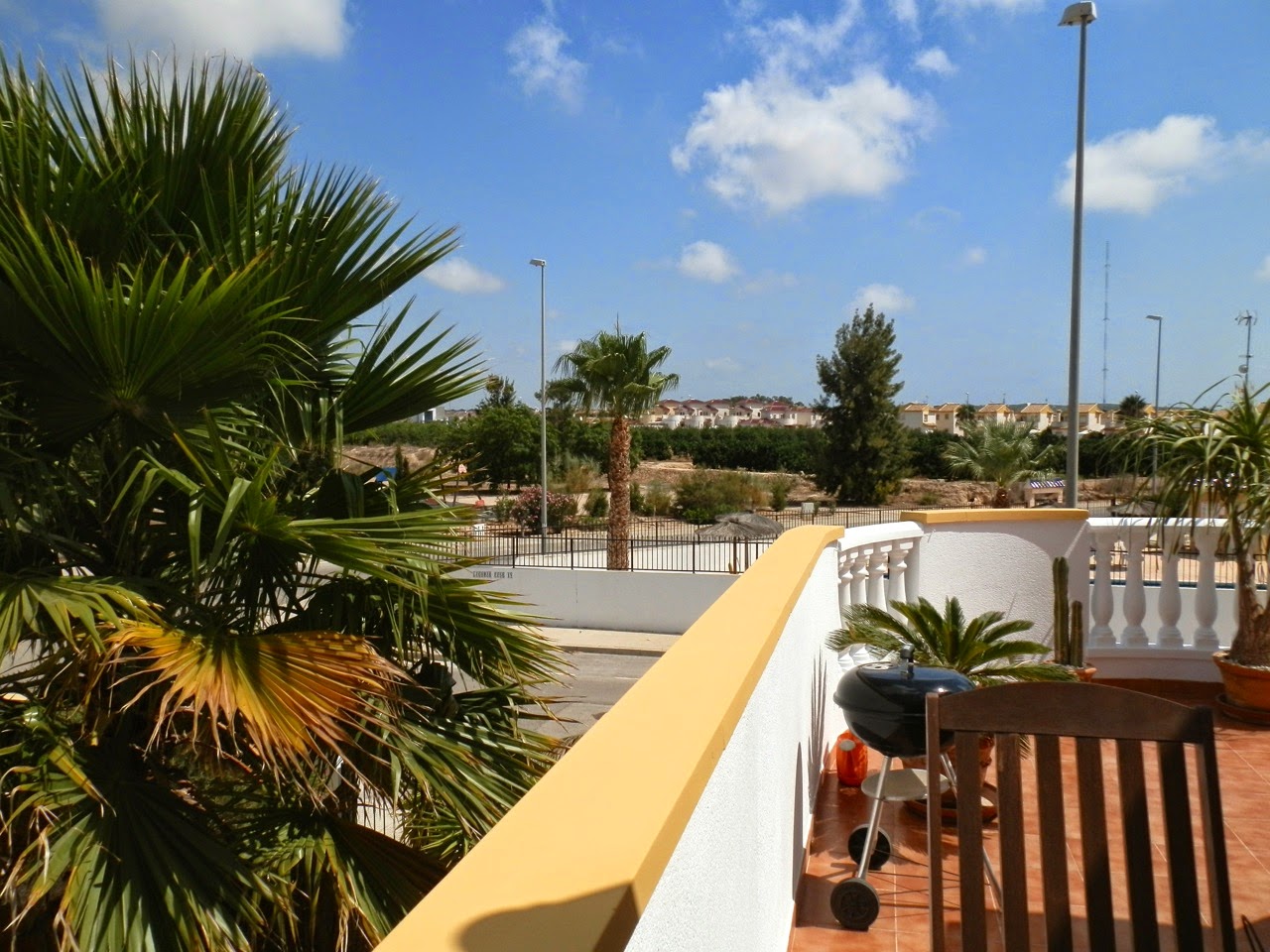 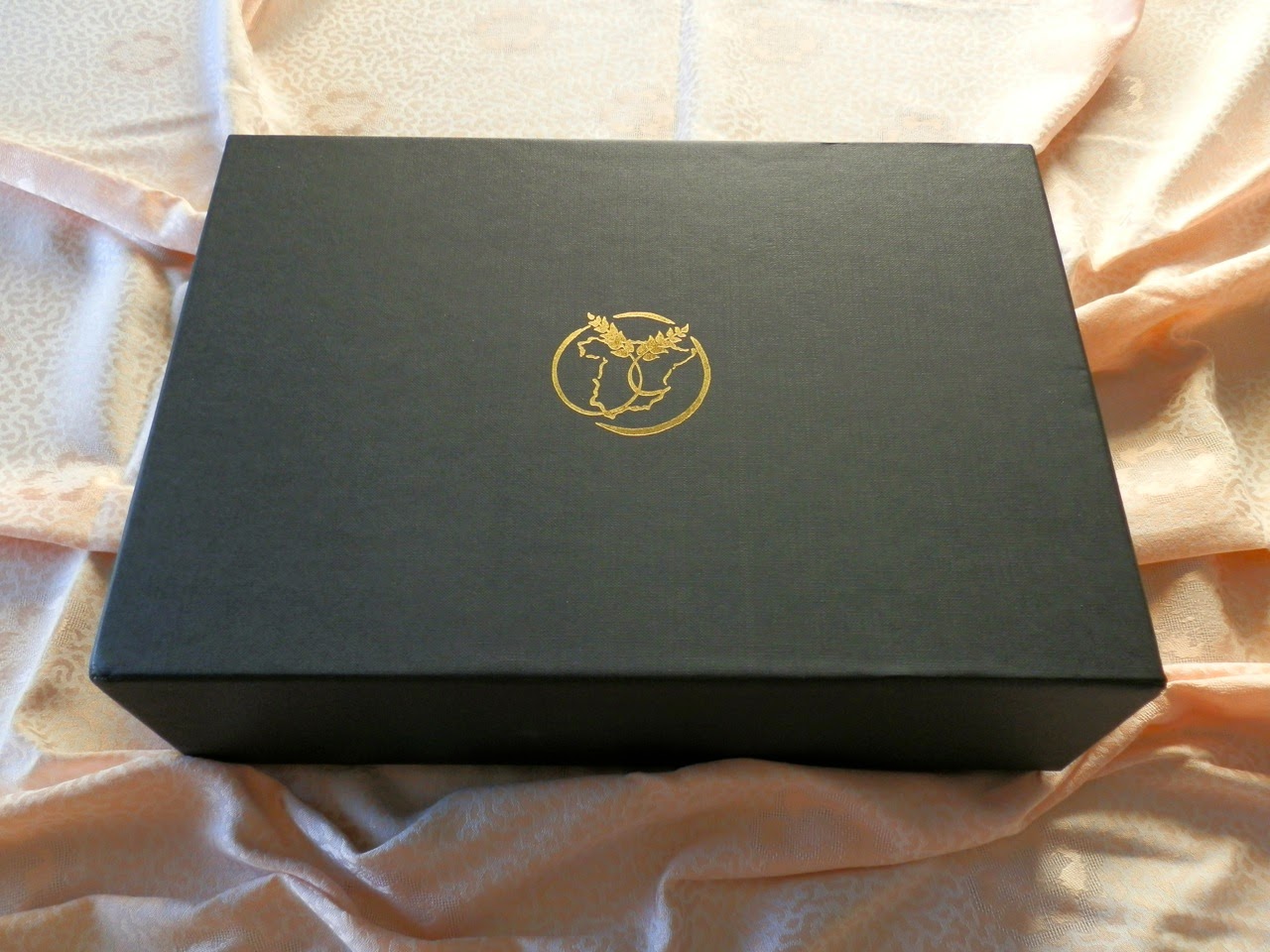 When you come to live in another country, you really do not want to limit yourself to the food you already know from your country of origin. Elise and I come from Belgium (well, I'm Welsh originally, but lived in Belgium for 35 years, so…). Belgium is a small country with a fine culinary tradition, offering plenty of variety, from sweet chocolate pralines to delightfully common stoofvlees met frieten, to more select plates that tempt even the most demanding of gourmets.

Now that we live in Spain, however, we like to try the local dishes, but this is not as easy at it sounds. Spain is a huge country and it isn't feasible for us to pop up to Asturias or Galicia, or across to Extremadura for an evening meal that includes the local specialities. We were therefore delighted to find a service offered by a company called GoodlitBox, which is advertised as offering gastronomic tourism.

The idea is that each month you receive a box of several specialities from a particular region of Spain, together with a booklet that explains what each product is and how it might be prepared. Each month a different region is selected, so that over the course of several months you can start to get an idea of the range of products available in the different parts of Spain. Great idea. Each box costs about 50 euro, but this can be reduced by ordering more than one box at a time. To start with, we have ordered three boxes, one each per month, which saves us about 10 euro. The price includes delivery.

Our first box arrived today, containing products from the region in which we live, Alicante. As you can see from the picture above, the box itself is pretty smart, being of hard cardboard, covered with a dark blue paper, which is embossed with a logo that incorporates a map of Spain.

Lifting the lid revealed that the products were well packed in straw. On top of the straw lay a GoodlitBox business card, the booklet about the products, a packet of mojama de atún (best described as a tuna ham), and a packet of date-and-walnut cake: 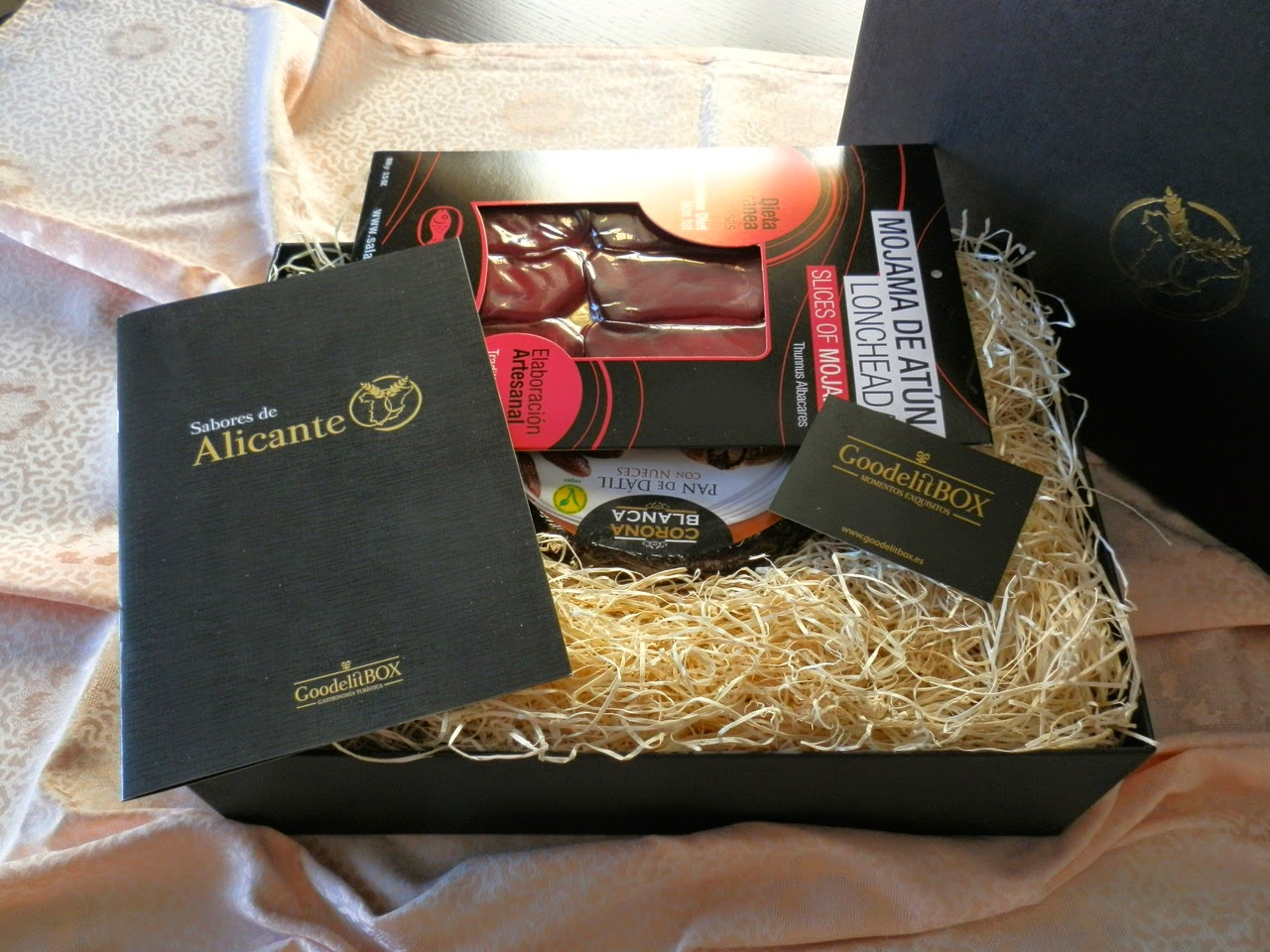 Removing the layer of straw revealed the following items: a bottle of Vino Cap d'Or Moscatel Mistela D.O.P. (Muscatel wine with l'appellation d'origine contrôlée); a jar of pericana (a sauce made of dried tomatoes, pine nuts, and cod); a jar of spreadso de alcachofa natural y aceituna negra (a mixture of artichokes and black olives, used in all sorts of preparations); a jar of pomegranate jam (very difficult to find); a jar of turrodella (a turrón spread, also difficult to find); a bottle of 100% ecological virgin extra olive oil. Here you can see these products, still in the box: 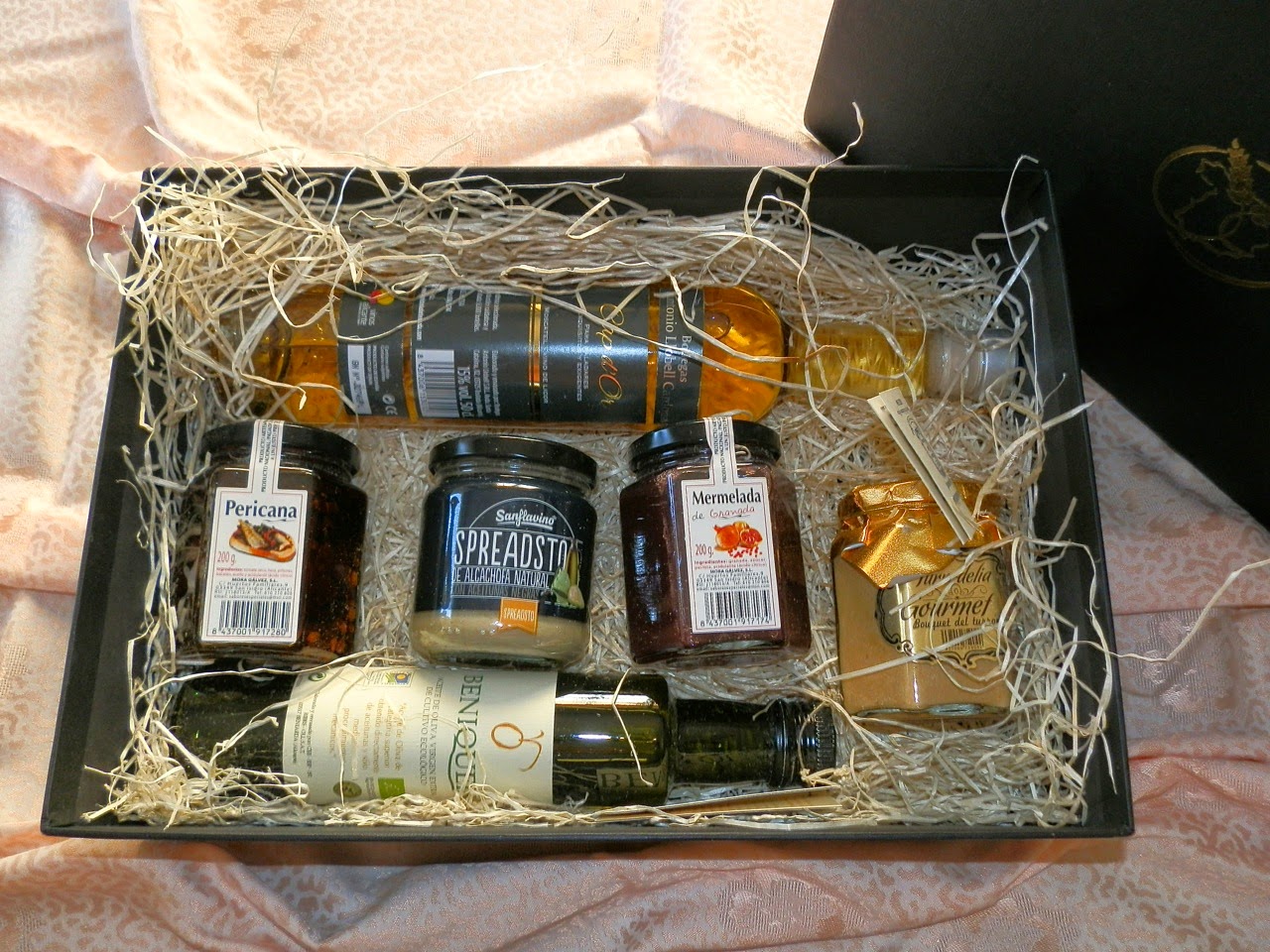 A pretty good first box, I think you'll agree. Here's you can see all the important contents: 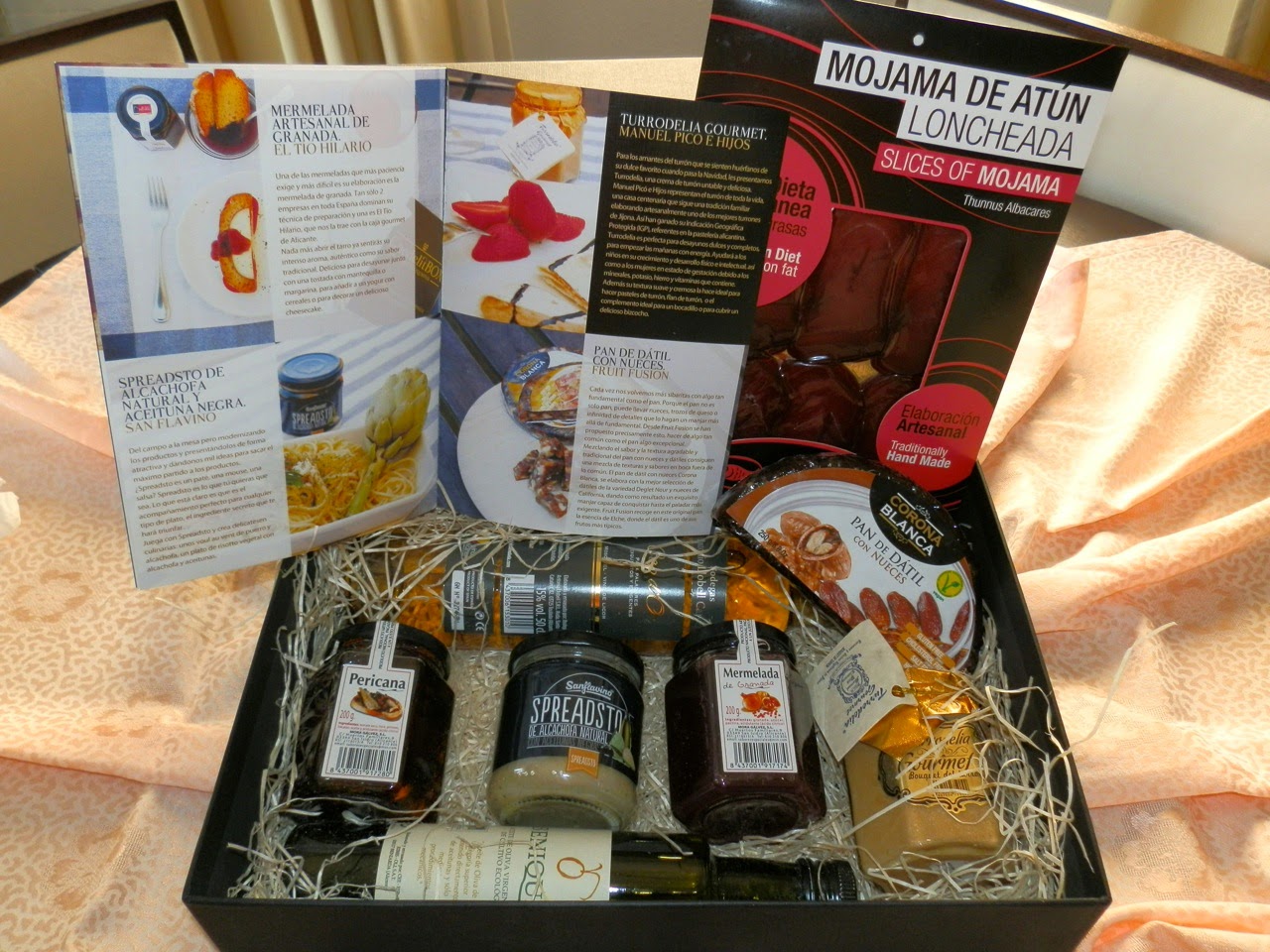 We shall start on this lot (the pomegranate jam and the turron spread shouldn't last very long!) and look forward to receiving our box of delights from Asturias next month.

If you'd like more information about GoodlitBox, visit their site here (you'll find a section in English, too). Note that they also provide a blog, where recipes can also be found (this part only in Castellano).
Posted by David at 17:42 No comments: 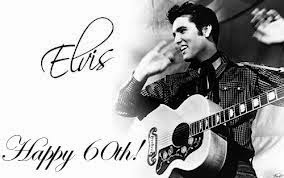