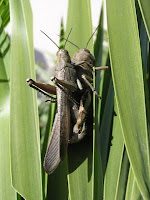 Well, it's been more than 24 hours since we first discovered the two locusts on our palm, locked in their lovers' embrace and they're still at it.

They've either got considerable stamina, or are locked together eternally, or are simply doing what their kind do. I suspect the latter.

They don't just sit there and get on with it, either, but have had a good wander around the palm, with Mrs Locust (I assume some marital relationship here) munching away at a leaf whenever she feels a bit peckish. 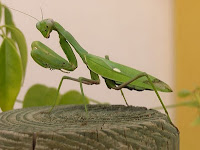 In the meantime, our other monster in the garden, the praying mantis, presumably being of a more religious than carnal nature, just keeps on praying.

You can see more photos of the garden monsters in this jAlbum.
Posted by David at 11:38 No comments: 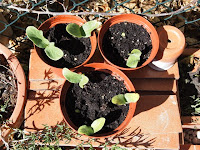 When we went to Belgium last October, She Who Must Be Obeyed thought it would be a really good idea to bring a pumpkin back with us. Apparently, the pumpkins that are available in Spain do not have an orange enough skin (no, no, don't ask for further explanations, as I am unable to provide them).

So one day, a neighbour in Belgium turned up with the order, except that, instead of just one pumpkin, SWMBO had ordered five of the things. And they were m-a-s-s-i-v-e. Cinderella wouldn't have had a mere coach from any one of them, she'd have had a flipping charabanc! Fortunately, they were able to just fit into the car and we managed to get them down to Spain intact, even if the cost of petrol doubled because of the added weight and I was almost obliged to relicense the car as a Heavy Goods Vehicle.

We still have one of the Belgian pumpkins, but the others have disappeared in the form of soup, or as gifts to puzzled Spaniards, who walk away with a quarter of a pumpkin and a somewhat dazed expression.

Not to be one to pass up a chance of giving me something to do, SWMBO carefully saved some seeds from one of the monsters and I sowed ten of these a couple of weeks ago. Already, nine of the seeds have sprouted, so if all goes well, we should have our own pumpkins in time for next October and there will be no need to cart any from Belgium.
Posted by David at 17:38 No comments:

Birds do it, bees do it… 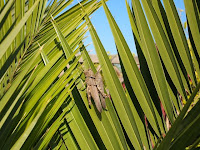 Altogether now, "Even locusts on palm leaves do it"!

We have been enjoying some really fine weather recently. Perhaps as a result, we have some "monsters" that have become more or less resident in the garden, including a praying mantis and a couple of locusts. The locusts seem to have got a touch of spring fever and spent all of today wandering around our palm in this most compromising of positions. The female seems to take it all in her stride, munching along as the male gets on with his purpose in life.

Ten points if you can guess the Elvis recording suggested. A clue: the title is hidden in the above text.
Posted by David at 17:30 No comments: