When It Rains, It Really Pours

I don't expect that Elvis was thinking of Spain when he recorded his magnificent version of "When It Rains, It Really Pours," but the song is certainly an appropriate one for much of Spain at the moment.

Even here in Guardamar, one of the driest parts of the country, we have had a couple of nights with some heavy rain (and no less than a small tornado in nearby Elche) and today the rain has hardly stopped. Heck, we have had to get the umbrellas out and have come home with wet shoes, something which rarely occurs here.

It is clear when driving and walking around, that the locals are not used to wet weather. This is not the case in all parts of Spain, of course, for much of the country, especially the northern regions enjoy (?) a great deal of rain, spread over the whole year. Down here in the south-east, however, rain is very unusual and there are quite simply no installations to deal with it. There are, for example, no drains in the roads to remove the water from the gutters. As a result, roads, especially those on a slope, soon turn into small rivers, with huge amounts of water reaching the lower points. And roads are laid with little or no thought to water control: they have dips in them and are often metalled incorrectly, so that large pools soon form. To add to the problems, much of the land has very little vegetation, and when heavy rain falls onto and then runs off it, the rain takes a significant amount of soil with it, often depositing that soil in the roads, thereby producing dangerous patches of mud.

The locals are pleased with the rain, for the ground is extremely dry and this quantity of rain will save a lot of money that would otherwise have to be spent on irrigation. In fact, there is no shortage of water in Spain; more than enough water falls here, but it is not equally spread over the country, with far more in the north than in the south. As with many other things in the country, however, poor management of resources leads to the crazy situation where the excess water of the northern regions is allowed to empty into the sea, while the southern regions spend huge amounts of money to develop and build desalination stations to take seawater and turn it into potable water. Madness! 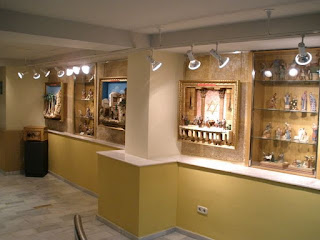 If you have an hour or so to spare in Alicante, a very pleasant way of passing the time is to visit the Museo de Belenes. Belenes is the plural form of Belén, or Bethlehem. In fact, the word is used here to indicate a nativity scene.

You don't have to be Christian to enjoy the displays of modelling that are exhibited in this small, but well looked after museum. I'm an atheist, but have been fascinated by the Spanish tradition of Belenes since I first discovered it some ten years ago and can only admire the work and dedication that goes into setting up these delightful models.

You can find Belenes all over Spain during the weeks leading up to the celebrations of the winter solstice (used by Christians to celebrate the birth of Jesus Christ) and on to Epiphany. They range in size from small scenes that people set up in their homes to very large scenes, sometimes displayed by a village or town, either outside, or, as in Guardamar, in a special room. Sometimes the scenes are extremely large, covering many square metres, often set up by local enthusiasts. San Javier, where the Murcia airport is located, claims to have the largest open-air Belen of Spain, covering 520 square metres and incorporating more than 1200 model figures with many moving elements. Another large one not too far from Guardamar is to be found in Casillas, a suburb of Murcia. This Belén is under cover and is particularly well known for its many moving parts.

Almost all Belenes have a secret: somewhere, hidden in the scene or scenes depicted, is a man crouching down, with his trousers around his ankles, doing his business. He is known as El Caganer (the crapper) and is said to be fertilizing the soil of the Belén, so that it will flourish again the following year. Probably originating in Catalonia, the caganer has become a popular element in Belenes and a small industry has grown around this single figure, selling not only the traditional form, but others, too, often depicting well-known personalities, including royalty and politicians, such as Barak Obama and Angela Merkel, to name but two.

I have to admit that I did not notice a Caganer in the museum, which was something of a disappointment, but otherwise the museum is a jewel, with many typically Spanish displays, as well as numerous nativity scenes from other parts of the world. The models are made of all sorts of material, ranging from clay, to wood, to ceramics, as well as less likely materials.

I have made a small Picasa album, showing the inside of the museum.
Posted by David at 19:46 No comments: