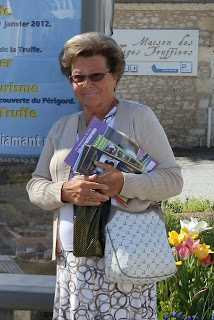 
Ah, yes, another year has passed, and so SWMBO celebrates her 46th birthday (with apologies to Eric Morecambe, they are all the right digits, but not necessarily in the right order).

The event was duly noted a few days ago with a trip to El Corte Inglés in Elche, one of Elise's favourite hideaways, where she bought numerous items to soften the blow, including yet another handbag to add to the collection.

To celebrate even further (is there no stopping?), she goes into hospital on Friday for a hiatus hernia operation. Hopefully, she will be back home by Saturday evening and all will once again be well with the inner workings.

Gelukkige verjaardag, Elise!
Posted by David at 10:07 No comments:

A Couple of Shakes

We live in a reasonably active area, at least as far as seismic activity is concerned. And earthquakes have no respect for a good night's rest, so at about twenty past five this morning, we were shaken awake by quite a good rumble. The epicentre of this nocturnal motion (if you'll pardon the expression) was literally just up the road form us, as can be seen in the map to the left (click on it for a larger image), provided by the Instituto Geográfico Nacional. The maximum magnitude was 2.8 and here in El Raso it was probably about 2.7. Not bad for a night's work.

As if that wasn't enough excitement for the day, this afternoon, at about twenty-five past three, there was a nasty little blip, which felt as if it was just below us. This time the epicentre was first reported by the Instituto to have been just off the coast, next to the lake at the bottom of El Raso, but that information was later corrected, to place the epicentre to the north-west of Guardamar, as can be seen in the following map:

This rumble had a magnitude of 3.2.

Who knows? There might be more to come, so batten down the hatches; make everything ship-shape and Bristol-fashion.
Posted by David at 16:25 No comments:

A whopper of a wasp

We are fortunate enough to have a rather unusual visitor to our garden, namely a mammoth wasp, or a Megascolia maculata flavifrons. I believe that this is the largest wasp in Europe.

And it really does live up to its "mammoth" name, for it is at least 5cm long. In fact, I have spotted two individuals, the larger one at 5cm or more and a smaller one that is perhaps 4.5cm long. Both of them are impressive creatures.

Both of them are also females. The body of the female mammoth wasp is black with large yellow markings. She has strong wings, tinged with amber, resembling the skin of an onion, showing crimson in the variegated light. Her legs are coarse, with a knotted appearance and are very hairy. She has a huge body and a powerful head, which is well protected by a hard skull. Her flight is quite low and is surprisingly quiet for such a large insect. The male mommoth wasp, which I have not yet seen, is less colourful and of finer frame.


The mammoth wasp does not attack humans (no European wasps do, except out of self-defence, so stop waving your arms about). Instead, it hunts out the larvae of the rhinoceros beetle (Oryctes nasicornis), which it paralyses with its sting in order to lay a single egg in the beetle's body. When it emerges, the larva of Megascolia then devours that of the Oryctes. 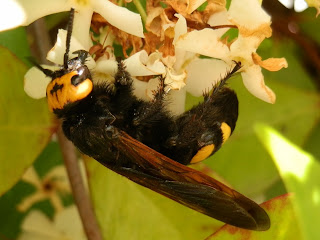 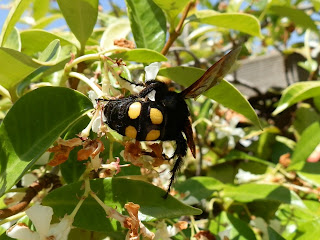 And here's a little video (the quality is far better than the preview image).