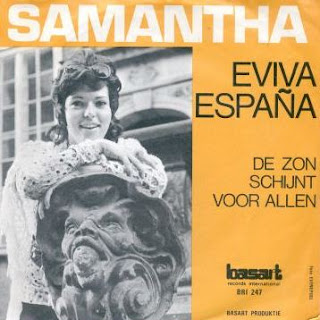 And then, of course, there's Eddy Wally, the self-styled Voice of Europe, who is world famous in several parts of Flanders…
Posted by David at 00:01 No comments:

For a long time now I've liked a good strong cup of coffee.

I think it started some 22 years ago, when I was on a business trip to Italy for the EU. My first stop was Milan and there I was introduced to "real" coffee in a small Italian bar. I asked for a coffee and was presented with a tiny cup, apparently filled with foam. Not wishing to show my foreign ignorance of things Italian, I added the sugar that was supplied to the contents of the cup, stirred (thereby discovering the coffee below the foam) and took a sip. Wow! This was coffee as I had never drunk it before, thick and creamy, with a wonderfully full flavour. At every opportunity after, I ordered the same small espresso coffee, and continued to enjoy this new-found pleasure.

Back in Belgium, I drank the usual filtered stuff, but wanted to be able to experience that same Italian flavour, a wish that seemed impossible to fulfil. Then one day, She Who Must Be Obeyed and I visited a trade fair and came across a stand that sold espresso coffee machines that worked with Illy coffee pads, though could also operate with freshly ground coffee. I talked a bit with the genial salesman and he assured me that his coffee would be just like the coffee I remembered from Milan. I agreed, though with little conviction, to try his brew. He placed a pad in the holder, fitted the holder in the machine, placed a small espresso cup under the holder and pressed the red button. A short while later, and accompanied by some very espresso-making sounds, an almost black liquid flowed from the machine into the cup, and a cover of foam gradually formed over the coffee. I took the cup offered to me, added some sugar, stirred and took a sip. I could almost have been back in Milan. This was by far the closest I had come to finding my Italian espresso, and I immediately ordered a machine and some coffee pads.

Since then, I have used the machine almost every day. I have only used the freshly-ground option on a couple of occasions and find it simply not worth the effort: Illy pads do very nicely, thank you.

I soon discovered the rest of the Illy world: Illy cups, Illy glasses (for the mouth-swilling cold water, taken after the espresso), Illy spoons. I have several sets of Illy cups, both limited and standard editions, and only use these cups for dinking Illy coffee: I wouldn't dream of placing a "foreign" cup on the machine, or of using an Illy cup for anything but Illy coffee.

I've just come back from a very pleasant evening with some acquaintances. A nice couple: quiet, interesting, Mac users, and Illy cup collectors. Imagine my horror when Francine (I use an alias to save her from embarrassment) announced that she had gone off Illy coffee somewhat and now preferred Senseo, but used her Illy cups to drink the Senseo coffee! Heresy, I say! Outrage, I cry!

Drinking Senseo coffee from an Illy cup is tantamount to running Windows on a Mac: it can be done, of course, but it merits a punishment worse than death. It's an insult to the Illy cups and Illy coffee. Let's be honest about it, the Senseo output is more of a warm drink than a cup of coffee.

At least Francine has a decent collection of Illy cups. I just hopes she doesn't defile them further…
Posted by David at 00:33 1 comment: