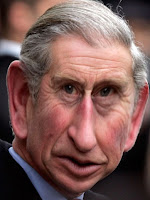 Charlie-Farlie and his latest bit of fluff, Camel Parker-Bowlingalley, were in Spain recently on what was presumably an "official" visit. And I bet they didn't pay for their pre-Easter jaunt, either. Bloodsuckers, like the rest of royalty, wherever they might be. Nobody should be accorded any privileges or advantages, merely because of an accident of birth; such things should be gained through merit and through merit alone. Gordon Bennett, this is 2011, not the Middle Ages, and it really is time we did away with birthright, religion and other such nonsense, the purpose of which is to keep a few rich in their comfortable position and the plebs in their place.

Charlie Farlie and his cohorts are a prime example of why such an antiquated system as royalty should be abolished once and for all. Like almost all of them, he does basically nothing, other than look foolish, but enjoys the income from his lands in Cornwall (and made Camel P-B the Duchess of Cornwall in the meantime) and probably gets a nice back-hander, courtesy of the rest of the tax-payers in the UK, too.

If that weren't enough, his son is now about to get married in a media event that will be blown out of all proportion. The really sad thing, is that those who know of no better will be lining the streets, waving the flags they've paid well over the odds for, and screaming their lungs out as a pathetic gesture of support for the young couple, whose prime duty will be to provide the next generation of leeches.

Then there's Grannybeth shacked up in Buck House. Well, at least she has had more sense than to abdicate in favour of son Charlie Farlie, probably realizing that putting such a plonker on the throne really would be the end of the Windsors (for want of a better name, of course): they got precious close to the end when Banana Spinster's untimely death raised more than a few questions. 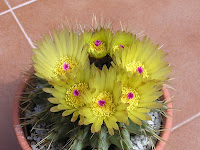 What used to be called Notocactus buiningii is now more properly referred to as Parodia buiningii. (Names and classifications have a habit of changing in the cactus world.)

According to Edward F. Anderson in his encyclopaedic work, The Cactus Family, Parodia buingingii is found close to Santana do Livramento, which is in Brazil, and Rivera, a neighbouring locality in Uruguay. The book also states that the cactus is reported to be rare. Well, it's often seen in the garden centres around here, so perhaps the book refers only to its occurrence in the wild.

This particular specimen is 14 cm in diameter and 9 cm tall, with 15 ribs. It currently shows 12 flower buds, 7 of which are already blooming. Actually, they only bloom when the sun "wakes them up" with a direct hit in the morning, and close up tightly again in the late afternoon, when shade returns to the plant.

Other cacti to show flowers are the members of the Mammillaria and Echinofossulocactus families. There are too many to show all the different varieties, so here are just one from each family. 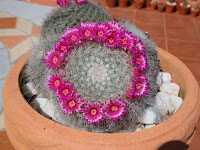 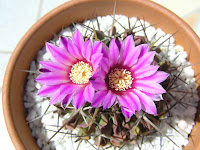