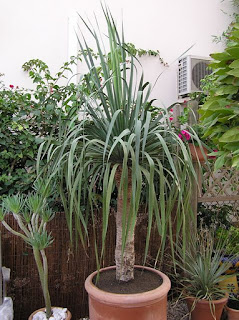 On 29 October (just two days time, as I write), She Who Must Be Obeyed and He Whose Task Is Simply To Obey (that's me, in other words) will have been married 40 years. We've known each other for over 45 years, but that's a different story.

40 years. So it seems that this is our ruby wedding anniversary. To celebrate this wondrous occasion, we decided yesterday to buy ourselves a Dracaena draco, otherwise known as the Dragon's Blood tree. Well, blood is red, which is the colour of ruby, or so I'm told, so it seems appropriate, especially as this particular specimen was looking rather lonely and forlorn in one of the local garden centres, so clearly needed a good home.

The stem is about a metre tall, which makes the plant about 15 years old. We've had it potted up in a good earthenware pot and it now looks happy in our ever-more overcrowded little garden, standing next to its fellow countryman, the Senecio kleinia, which is seen to the left of the photo.

Both these plants originate from the Canary Islands, with the Dracaena also being found in Madeira, the Cape Verde Islands, and the Azores.

If you have visited Tenerife, the chances are that you have seen one of the few Dragon trees to still grow in the wild: a specimen estimated to be about 1,000 years old is a tourist attraction in the village of Icod de los Vinos. It is, of course, just a tad larger than our own…
Posted by David at 16:01 No comments: 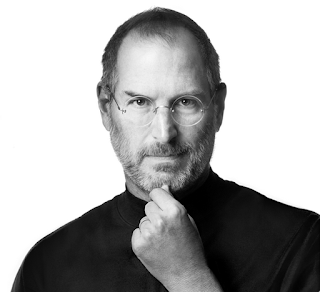