Not the best of journeys 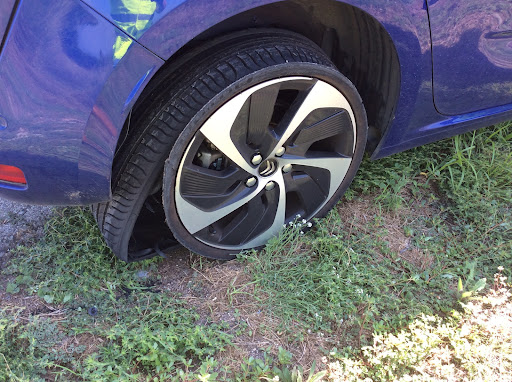 Things had been going well.

We started our journey on Friday morning and, apart from a relatively long traffic jam between Waregem and Kortrijk, which cost us about half an hour, the driving was good.

We had taken food and drink along with us to have on the way, so our ventures into service areas were only for quick relief. That evening we stopped in Dijon, and again fed on our own provisions. (We haven't been to a restaurant for a couple of years and are extremely careful in this Age of Covid.)

Saturday provided us again with a pretty pleasant drive, though the expected slow traffic through the tunnels of Lyon gave us plenty of time to breathe in the fumes and admire that town's Guggenheim, not quite up to Bilbao's standard, but still very impressive.

Anyway, after a delay similar to that in Belgium on Friday, we drove on to cross the border into Spain and reach Girona in the early evening. We stayed at our usual hotel, the Costa Bella, where the restaurant seems to have improved. Yes! We ate our evening meal in the restaurant, where, fortunately, very few other guests were present, at least not at the early time by Spanish standards that we chose to eat.

And so to Sunday, when we had planned to drive the rest of the journey, some 700 Km to Guardamar del Segura, arriving there at about five in the afternoon.

Some thirty or forty kilometres before Valencia, the yellow tyre low-pressure warning light came on, accompanied by some loud peeping. I started heading for the emergency lane, but before I could reach it, the rear near-side tyre exploded and things became hairy (thank goodness it wasn't a front tyre). Still, I was able to get onto the emergency lane and bring the car to a halt.

We put on our fluorescent jackets, left the car and placed the warning triangles. The car is fitted with an emergency call system to Citroën Assistance, so then I used that to inform them what had happened and where we were. We expected to be helped within a half hour.

After that time, I called again, had to give the same details and was again told that help would soon arrive. After a couple more calls to Citroën Assistance, a tow-truck finally arrived at about 17.30, some three hours after the problem was first reported.

The car was taken to a strange abandoned petrol station/garage some 20 to 30 Km distant. The wheel was removed and replaced with the emergency wheel, basically an excuse for a wheel with which can drive at a maximum speed of 80 Km/h.

We finally arrived at Guardamar at just past ten o'clock in the evening and then discovered that the bag containing my passport had been lost/stolen in all the confusion.

A new tyre was fitted the next day.

And we only came down to sell the house!