Yesterday was election day here in Spain. Local elections, at least, the general elections being held next year.

As expected, the PP more or less swept the board, dealing a heavy blow to the socialist PSOE, the party of the national government. How Spain can remain so right-wing is a worrying mystery, I have to admit.

The PP has achieved this largely through unjust claims, jibes, complaints and other "mentiras" at the expense of the PSOE. The only hopeful aspect of the situation is that the PP at local level will show that the problems that they have ridiculed are genuine ones, which do not have simple solutions. Indeed, most of the problems are either PP generated (from their previous term in office) or are a direct result of the international financial crisis (produced largely by right-wing policies, such as those supported by the PP). Perhaps then th Spanish people will see the error of their ways and will vote for the PSOE in the general elections of ne xt year.

We can but hope.

Photo attribution.
Posted by David at 21:35 No comments: 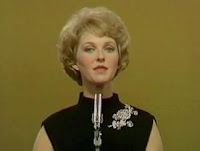 (And my douze points go to Moldovia.)
Posted by David at 00:15 No comments: 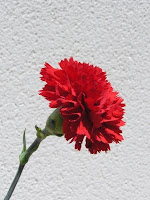 The run-up to the local elections here in Spain started a few days ago, so now placards, posters, banners and other electioneering paraphernalia adorn every available space, as the various parties try to persuade us that our vote is best spent on them. If the pollsters are to be believed, and that seems highly likely this time round, then the PP (Partido Popular) will make huge gains across almost the whole of the country, thereby taking control of many more "ayuntamientos" from the unjustly maligned PSOE (Partido Socialista Obrero Español).

This is a terrible thought. True, Spain is still very much divided between left and right, but relatively recent history has shown just what the right is capable of, and local councils already controlled by PP are hives of corruption. The PP is basically the party of Franco's heirs, an ultra right gang of conservative, catholic, anti-socialist individuals, who probably have gilt-framed photos of Margaret Thatcher in their bedrooms and think that Bush was the personification of the Second Coming.

The poor PSOE has had a hard time in main government and this will be reflected in the results of these local elections. They are blamed for an economic crisis with which they have had little to do, a crisis of worldwide proportions, generated by greedy bankers and suchlike, which has had repercussions in a Spain whose economy the PP, when it was the governing party at the end of the last century and the beginning of this, ensured was built on the shaky foundation of the construction industry, which, if it did not build a solid economic platform, at least meant big backhanders for the PP-ers who ensured that land was redesignated as building-ground, irrespective of the actual legality of such actions and with no regard at all to the future.

In many ways, El Raso, the estate where we live, is a miniature example of Spain and such PP shortsightedness. The area occupied by El Raso was designated building-ground by the PP when they ruled the roost in Guardamar, even to the extent of allowing roads and building plots to be laid out in the area immediately adjacent to a nature reserve, when the law expressly prohibited such behaviour. A large housing estate was established, including numerous very large, well planted roundabouts and several green areas. All very nice and prestigious, but no thought had been given to the maintenance of these areas, nor to the provision of telephone lines, or a postal service. The PP was interested only in large short/term gains for the few, of course.

Thankfully, the PSOE took over control of Guardamar after only a limited amount of construction of buildings in the prohibited zone, but the damage had already been done by the roads, which had first been laid, and the inadequate planning for service facilities, thanks to the PP's lack of forethought. As a result, the PSOE was left with a host of El Raso-related problems and an extremely limited budget with which to solve them. They have, during the past five years or so, done much to improve matters, but this goes unnoticed by most, who see the problems as occurring during the mandate of the PSOE and remain blind to the reality that they were generated by the PP.

This is remarkably like the situation in Spain as a whole, though on a far smaller scale, of course. The really sad part is that the results of these local elections are likely to be reflected in the general elections, to be held next year. Spain will then most probably lumber itself with an inward-looking, Europhobic, xenophobic government and control by the PP will be complete, with both local and national governments in their hands. That will be a sad time for Spain and a sad time for Europe, too, as yet another country falls to the short-term thinking of the right wing, who delight in strengthening delimiting borders and even building more.
Posted by David at 00:14 No comments: 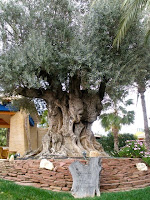 There's a Spanish saying, "Malas hierbas nunca mueren," meaning that weeds never die. It seems that this might also apply to olive trees.

Close to us is the Hotel La Laguna and in the small gardens of that hotel is this magnificent, ancient specimen of Olea europaea farga. This sort of tree is prized for its small brownish-blackish olives, which produce excellent oil. Who knows how many people, not to mention birds and so on, have profited from the produce of this venerable being? 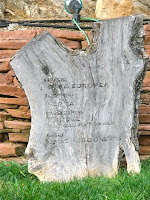 The wooden plaque at the base of the tree indicates its Latin name (sadly misspelt) and tells us that it originates from the old Roman Road in Teruel, which is some 400 Km from the tree's current location. Not only is this a well-travelled tree, it is also one of remarkable longevity, for the plaque further informs us that its age is between 1500 and 1800 years!

Now it looks absolutely wonderful for its age and one can only hope that it will outlive many more generations of paltry humans.
Posted by David at 12:08 No comments: