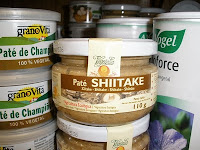 We were in the El Corte Inglés store in Elche today (yes, again) and I came across a jar of paté in the health-food section.

As faithful readers of this blog will know (if there are any) from my earlier posting, "How an mp3 player helps to relieve me of my haemorrhoids while allowing me to play with my little organ…," I am one of the world's foremost haemorrhoids sufferers (or so it seems at times). I was, therefore, immediately drawn to the name of the product, "Shiitake."

Could this be the latest in haemorrhoids treatment? A cream-like paté to be spread on one's slice of home-made bread?

I hate to imagine where else one might spread the paté and instructions on the label were less than abundant and far from detailed. 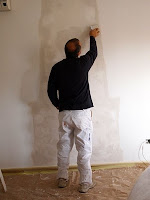 As indicated in the previous post, the fireplace and chimney-breast were removed, giving more space in the living-room. The wall, of course, retained a huge scar, with a smaller one in the ceiling, so it was now time for the painters to come in and do their bit.

The two painters arrived on Monday morning and prepped the whole thing, covering all necessary areas with masking tape and brown paper; the air-conditioning unit was wrapped up like a Christmas present and the windows were also largely covered with brown paper (we had decided to have the walls around the windows painted, too, as the original paint was flaking there). 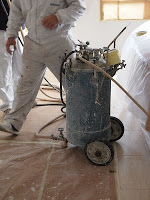 Painting walls is rather more complex than it sounds here in Spain. Walls are often not smoothly painted here, but instead are finished with a rough texture. This is achieved by first spraying a thick paste onto the wall in the form of tiny droplets. Once dried, the now rough surface is painted in the desired colour. The paste that is used to form the droplets is held in a large, bomb-like contraption, which is connected to a compressor. Once sufficient pressure has built up in the "bomb", an adjustable nozzle is used to direct the droplets to the wall. I must admit, this all seems like a lot of extra work to me, but the resulting effect seems to be appreciated here, though it makes reverting back to a smooth surface a real bind. 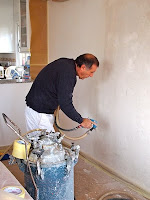 By mid-day on Monday, the prepping and droplet-spraying had been completed, so the painters left in order to allow the droplets to dry sufficiently for the actual painting, which would take place the next day. That went very smoothly, with two coats of quick-drying paint put on with brush and roller. Once the painting had been completed, the two painters removed all the masking tape and brown paper, and even mopped the floor carefully and thoroughly.

They had worked well and done a good job. 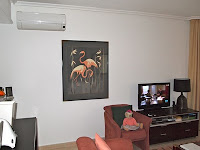 There is but a fine trace of where the chimney used to be, which is cunningly hidden by a large framed silk painting.

Numerous photos, following the progress of the demolition and repainting, can be seen at this Picasa album.
Posted by David at 13:43 No comments: 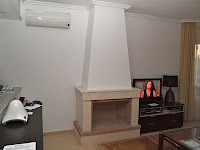 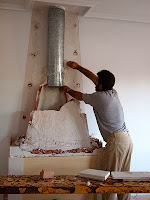 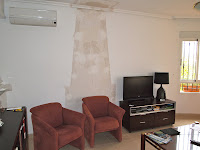 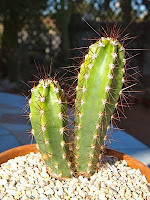 Some time ago (perhaps more than a year), a well-meaning friend bought me a sort of presentation box containing four small cacti. He had bought them at a local market because he had "never seen anything like them before." Well, no, he wouldn't have, as these poor little plants had been spray-painted, presumably to sell them better to unwary customers: purple, blue red and yellow were the chosen colours, if I recall correctly. I just allowed the paint to wear off over time and have gradually moved the cacti to larger pots. They now look like they are meant to look and can get on with their lives again. Here are photos of them as they are now, for you to see how they have recovered.

If you can identify any of these cacti, please do so. It would be a great help. 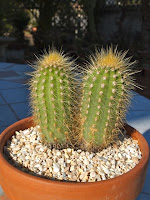 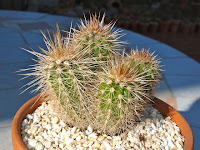 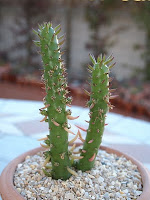