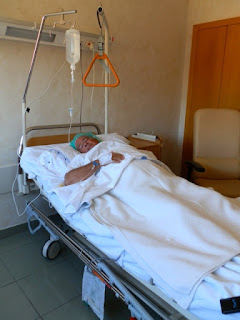 We had to be up early on Monday morning in order to be in time for my appointment at the hospital at 07:15. Yes, that's a quarter past seven in the morning!

We arrived on the dot and were surprised to find that the admitting staff were there, too (last time we had to wait about twenty minutes for them to arrive), and that all was ready and waiting, so that withing about ten minutes we were on or way up to the room.

Shortly after entering the room the nurses were there with their razors, ready to shave me in all sorts of places: I was still in my ordinary clothes! So, out of the street clothes, into the operating gown, lie on the bed, scrape, scrape, scrape, ready to go down to the theatre area, here comes the orderly and off we are. Things have never moved so fast in Spain, I can assure you.

And it didn't stop there, for I had hardly arrived at the waiting area, when a nurse was already trying to find a vein in my hand (always difficult) and the anesthetist was asking questions. I don't know much of what happened after that, as I was given sedation: I vaguely remember being lifted up in order to have the epidural injection in my back, but that's about it. Next I know, I was in the recovery area and shortly after that I was back in my room with full plumbing (both the room and myself).

The procedure that had been carried out was a ureterorenosopy: looking up the ureter and into the kidney. The kidney couldn't be reached about a month ago, so a ureteric stent had been in place since then. This time, presumably thanks to the stent, the kidney could be reached and examined.

What was found is both good and bad news.

Good because nothing was found.

Bad because nothing was found.

The doctors had expected to find the tumour in the kidney. Had they done so, there was a chance it could have been removed there and then. Even if it were too large to remove immediately, knowing its location would have meant that an operation to remove it could have been planned. Now, hoever, things are rather more problematic. As I understand it at the moment, either the tumour is a flat one, which is more difficult to locate, or the tumour is elsewhere.

In any case, the doctors involved are having a meeting about the case this week and I shall know more about the possible courses of action next week.

I feel a lot better after this procedure than after the previous one. The stent has been removed, so I am much more comfortable. There is already no more blood in the urine (last time it took a full week for visible traces of blood to disappear) and I have far less pain when going to the toilet.

A Date to Remember and Sand

We went to the hospital this morning to see if we could get any news about the next procedure. Of course, all was in hand and they would call me back this afternoon to let me know when it would take place.

To be fair, they have just called back and I must first go in next Tuesday for a blood coagulation test and to speak to the anaesthetist, in preparation for the actual procedure, which is then planned to take place on 29 October.

A day to remember! Not especially because I shall be yet again in an operating theatre, but because it will be our 41st wedding anniversary!

Meanwhile, the rest of Spain seems to be having plenty of rain, but here only a few drops have fallen from what is admittedly an overcast sky. The drops fell as we were driving back from the hospital, but there were insufficient to even give one swipe with the windscreen wipers.

Last night it rained in a different way, with lots of very fine almost red sand having fallen whilst we were sleeping, so that we were met this morning with a light dusting of sand over the tiles, the car, the windowsills… heck, everywhere where it could possibly land. Apparently there have been some very nice sunsets in the north of Europe because of the amount of sand of Saharan origin that is flying around in the atmosphere. Well, there's less of it now, as a lot fell in Guardamar.

Haven't heard anyhting from the hospital yet, so I still do not know when the next procedure will take place.
It's not an ideal situation, not knowing when you will have to go back into the hospital. Not that I am especially looking forward to going in again: the procedure itself isn't a problem, as I shall be anaesthesised, but the recovery is initially painful and continues to be unpleasant to say the least.
At least I shall (I hope!) be rid of the stent that was put in last time. It is uncomfortable at the best of times and I am constantly aware of it.
Posted by David at 22:27 No comments: