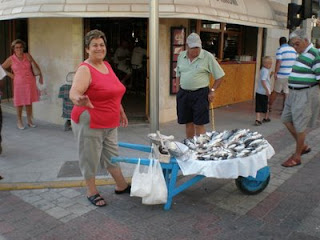 The women collect the fresh fish from the Guardamar fishing quay every morning from Monday to Friday. With their sarandas full of fish that is often still alive, they return to Guardamar, where they call out their wares as they walk through the streets and stand for a while at their preferred corners. They have magnificent voices; they call, rather than sing or shout. Exactly what they call is difficult for the foreign listener to understand: I am sure it is a mixture of Valencian and whatever the local dialect might be, with a bit of Castilian thrown in here and there ("de todas las clases" seems to be a well-used phrase). It doesn't really matter, for everyone knows the sound of the saranda women and its significance: who will buy my fresh fish!
Posted by David at 14:19