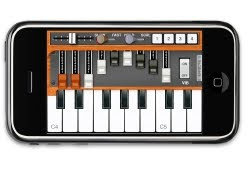 Don't get me wrong, I was never a virtuoso; nothing like it! But I can follow a relatively simple score and Pocket Organ provides more than enough scope for my limited abilities. I'm already belting out Welsh favourites such as Calon Lân, Myfanwy, Sosban Fach and Wooden Heart (well, that's Elvis via Swabia, but you get the idea).
Posted by David at 12:31