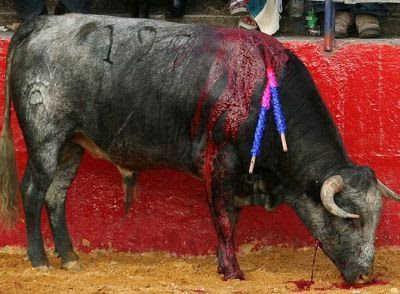 The nine days of the San Fermin festivals in Pamplona have just come to an end. Basically, a long week of drunkenness, using an ancient "tradition" to justify such boorishness and the peculiar cruelty to bulls for which Spain should be ashamed.

Each day, six bulls are forced to run a course through the narrow streets between their corral and the town's bull-ring. Men, usually quite young and many the worse for drink, run in front of, at the side of, and behind the bulls, in an attempt to prove how brave they are, the bravest staying just ahead of the bulls, of course. The bulls are poked, prodded, and struck in an effort to make them run as quickly as possible. Not infrequently, this results in one or more of the bulls slipping, falling, and sliding upon the hard paved surface of the road. The unfortunate bull is then encouraged to get up as quickly as possible to continue its ridiculous journey, something that can only be lamented. The fact that the men might also slip and fall, with resulting injury, is to be applauded, rather than lamented, for these idiots have chosen to take part in this exercise of goading a creature that knows no better.

Later in the day, a "real" bull-fight takes place in the bull-ring. This is also touted as being "traditional". But no recourse to tradition, no fancy costumes, no pasa-doble-playing bands, and no quantity of "Olés" can hid the fact that this is cruelty at its most cruel, plain and simple: the bull is forced to undergo all manner of torture to cause it to lose blood, weakening it to such an extent that a matador can prance and strut before it, performing "artistic" passes, before attempting to kill the animal with a sword in the hope of being awarded one or more ears (I kid you not). Thank goodness in the past week or so, the bulls have had a bit of their own back by goring several of these fools.

Come off it. This is the twenty-first century and it really is time to reject such barbaric past-times. We have largely eliminated most other cruel sports from Europe: bear-baiting, dog-fighting, cock-fighting, badger baiting, fox-hunting… so it really is time to also accept that bull-fighting is not an artistic tradition. Instead, it is a pathetically cruel act of cowardice, quite inappropriate for a civilised society.

Soon, the Catalonian regional parliament will vote on whether to ban bullfighting (the Canary Islands banned it in 1991). The Partido Popular (a dangerous right-wing group of Franco-lovers) is, of course, pro-bullfighting (hey, there's a lot of money involved in it). Let us hope that the more sensible members of the parliament will vote sensibly on 28 July and at least one part of mainland Spain will be free from this shame the besmirches the image of the country throughout the world.
Posted by David at 18:24