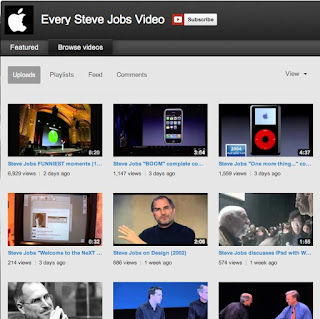 Steve Jobs, one of the founders of Apple Inc., was born on 24 February 1955. Today would have been his 58th birthday, had he not died on 5 October 2011 of complications related to a pancreas neuroendocrine tumour.

Jobs was a highly charismatic individual. He could be obnoxious, appear aloof, seem impolite… but he was also somehow able to inspire others into producing great examples of both hardware and software, though not always using original ideas (the Macintosh was not originally his idea, for example). He seemed to possess a boyish enthusiasm for all things technological and he used that enthusiasm to present excellent, amusing, and entertaining presentations of Apple products.

Apple has perhaps struggled somewhat since Jobs's passing, but that is hardly surprising, given the enormity of his influence. It should be remembered, of course, that not all of Jobs's ideas were successful; it's just that the magnitude of those that were successes far overshadows the failures.

To celebrate Steve Jobs's 58th birthday, a YouTube Channel has been created, containing about 150 videos featuring the man himself.