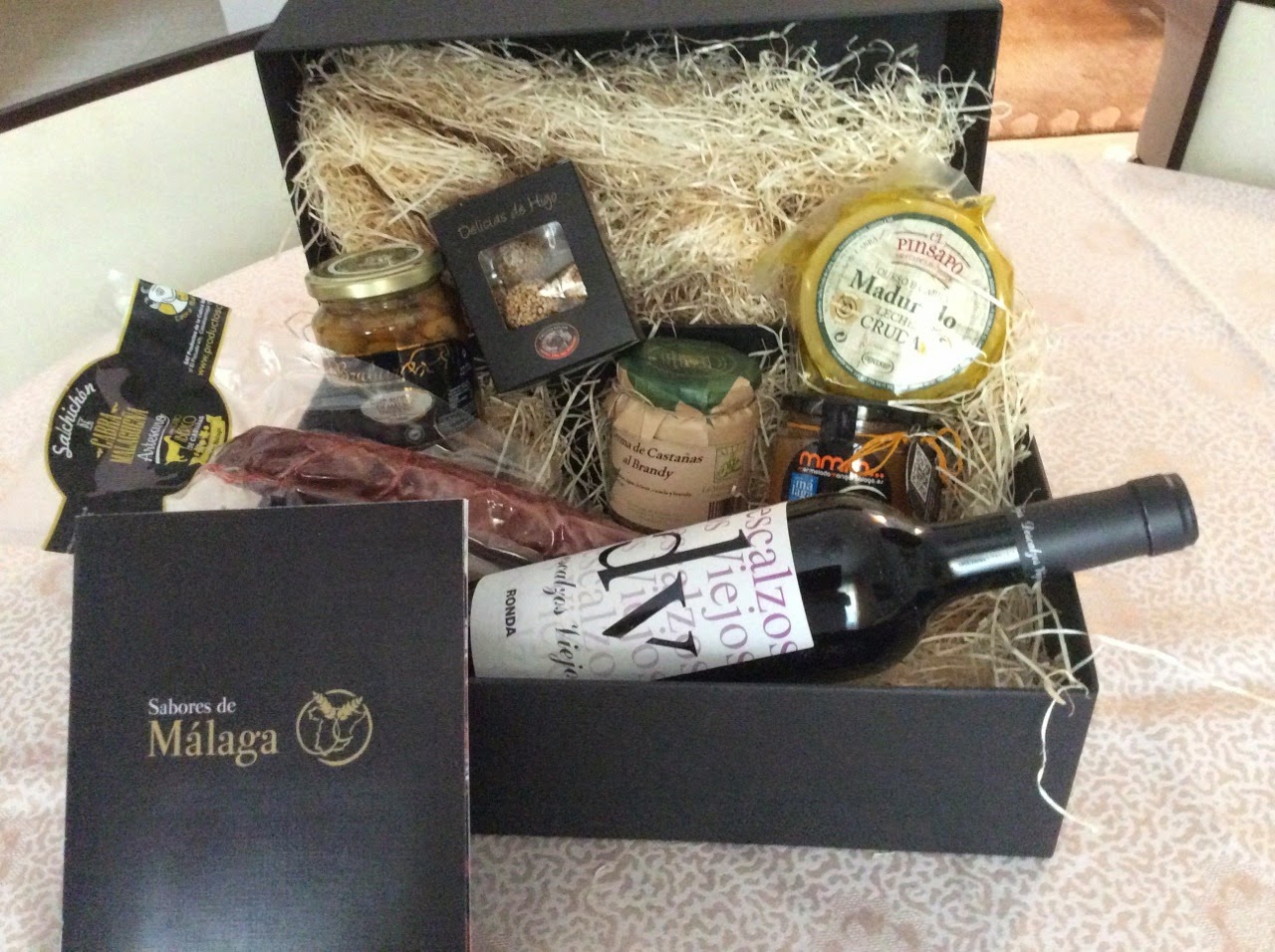 As mentioned in the previous entry, shortly after returning from our extended visit to Belgium, two GoodlitBox hampers were delivered. In that entry, I also described the contents of the Asturias hamper, so here I shall tell you about the products in the hamper dedicated to Málaga.

Wine-making has been practised in the Málaga region since about 600 BC. The Descalzos Viejos winery has not been around quite that long, but was founded in the sixteenth century and has a fine reputation. A bottle of a recent DV wine (2012) is included.

Spain and olives go together and the inland area of Málaga, with brief periods of colder weather, offers ideal conditions for growing these fruits that so many people enjoy (not me!). Aceituna y Encurditos Bravo (Bravo Olives and Pickles) bottle a particular olive under the name Aceitunas Brabur; this olive is the first olive in Spain to have been awarded a Protected Designation of Origin. The hamper contains a large jar of these special olives.

Chestnuts. We used to call them Spanish chestnuts when we went picking them in Greenwich Park (I lived in south-east London for a number of years as a child). The story was that the trees had been brought from Spain. No idea if that's true, but chestnuts are represented in the hamper, in the form of a cream of chestnuts and brandy. The cream is an artisanal product, made by la Molienda Verde and contains no chemical additives, such as preservatives, artificial colouring, etc. Apparently, the cream can be eaten as a spread on bread or toast, as an ingredient for pastries, or as an accompniment for meat dishes, being especially suited to game.

I love goat meat. I'm not too keen on salchichón. The latter is usually made with pork, so I was surprised to see a good looking salchichón made with goat meat (from the Malaga goat breed) in the hamper. Should be interesting.

I also love mango, so the jar of mango jam, made by the cleverly named mmm (Mermelada Mango Málaga), should prove very satisfying.

As its name suggests, Pasa de La Axarquia is a company that is largely dedicated to raisins. Fortunately, the product representing this company in the hamper is not raisins, but figs. Delicias de Higos (fig delights) are small balls of fig coated in sesame seeds. Can't wait!

The cheese that is included in the Málaga hamper should be delicious. The name is El Pinsapo and it is made with pure goat milk (again, from the Malaga goat breed); it is then left to mature for three months, during which time it is rubbed with local olive oil and then wrapped in a bath of olive oil. The cheese won gold at the 2013 World Cheese Awards, in Birmingham (UK) and has taken numerous other prizes as well. Yummy. (Sadly the manufacturer's website seems to be no longer available.)

So, another great hamper. Elise and I are so pleased with the products and the service, that we have decided to order the next three hampers.

If the idea of trying new tastes from different parts of Spain appeals to you, why not visit the GoodlitBox website, either in Spanish or in English.