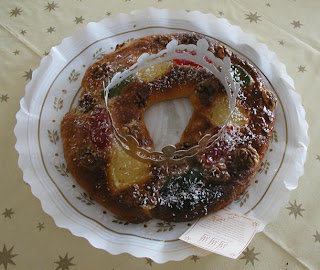 Merry Christmas, in other words, though the concept of Christmas is somewhat different here in Spain. The whole period from Christmas to Epiphany is encompassed in the term, rather than the more limited time generally referred to in the north of Europe. Most towns and villages are decorated with coloured lights, often quite elaborate, and a commercial frenzy accompanies the mid-winter feast, now largely taken over by the Catholic church. I'm sure that few Spaniards are aware of the real nature of Christmas: a time to celebrate the end of the darker days and the coming of the new light, with deliciously pagan symbolism, including green trees, imitation fruits to hang on the trees (the decorations) and the Spirit of Winter himself, now transformed into Papa Noël/Father Christmas/Santa Claus and anything else but the "real" thing.

At Christmastime, almost every town and village in Spain is illuminated with special Christmas lights strung across the streets and has a tree in its main square. On a rather more traditional level, seasonal songs, of both a religious and a lay nature, called villancicos, are sung to the accompaniment of pandaretas (small tambourines) and zambombas (a small drum, which has a rubbing-stick stuck into it. Another very popular tradition is that of the Belén (Bethlehem), a sort of nativity scene, though often not limited to a mere stable; instead a complete village is reproduced, often including moving parts and running water. I provide an idea of both a villancico and a Belén (that of Guardamar) in this YouTube film.

The gathering of the family is an important part of the Spanish Christmas and this occurs on any or all of the three most important dates of the season: la nochebuena (Christmas Eve), la nochevieja (New Year's Eve), and los Reyes Magos (5 January, the eve of Epiphany).

The most important family gathering and dinner of the year is undoubtedly la nochebuena (literally, the good night). Culinary traditions vary in different parts of the country, but it is likely that some roast lamb or sea-bream will be prepared as the main course, with turrón as at least one element of the postre, or dessert. Turrón is a delicious confectionery, made of almonds, honey, and sugar, presented in various forms from soft to very hard. The meal is often followed by a visit to la misa del gallo, or midnight mass (though literally the cockerel's mass).

La nochevieja (literally, the old night), is another excuse for a family gathering, which includes the peculiar tradition of eating twelve grapes, one for each strike of the clock at midnight. ("Traditional" is saying a lot in this context, as the exercise dates only from the early part of the 20th century, when an extremely large grape harvest made the growers think of some clever way to sell more of their produce.) As well as family get-togethers, many Spaniards congregate in town squares, wherever there is a large clock, to welcome in the New Year. Partying then continues well into the early hours of the morning.

During all this time, the children are most looking forward to the night of 5 January, when los Reyes Magos (the Three Kings) come to distribute gifts. Prior to this, most towns will have welcomed the kings in large processions and the children will have been given the opportunity to either hand their letters, containing their wish-list, either to the kings in person (special podia are set up, with thrones and attendants) or through the Royal Postman, stationed in strategic positions throughout the land (usually in department stores, of course).

On the morning of Epiphany itself, breakfast often includes el Roscón de Reyes, a ring-shaped sweet bread, filled with preserved fruits, often angelica. Hidden in the bread is a figurine and a bean. Whoever finds the figurine is allowed to wear a golden crown, but the finder of the bean must pay for the drinks.
Posted by David at 14:41