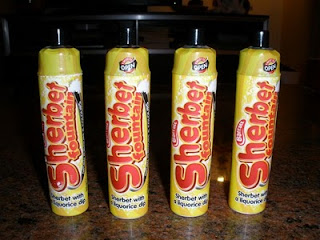 When I was younger and, indeed, when I was not so young, I loved Sherbet Fountains. They were a confectionery, consisting of some basic white sherbet and a "straw" of liquorice through which to suck it. These ingredients were packaged in a thin cardboard tube, wrapped in yellow paper that was twisted tightly around the liquorice that stuck out of the top. As you sucked on the liquorice in an often vain attempt at extracting the sherbet (which would eventually overcome its blockage and shoot up the back of your throat, into your nose causing an excruciatingly pleasant discomfort), the paper wrapped around the liquorice would gradually become wetter and gunkier. Delicious!
Sherbet Fountains became less available once I moved to Belgium, but on the occasional visit to the UK, I would stock up on them, even though they were becoming increasingly difficult to find. I countered this by simply buying a boxful at a time, much to the surprise and delight of the lucky shopkeeper. Then, as I became still older, the search for SFs gradually ceased, though even then, they were always in the back of my mind. I must admit that, now that we live in Spain, I didn't think I'd suck on the fountain again.
Well, look what I've received for Christmas: four (read my lips: four) tubes of this wonderful confection, the genuine Toot-sweet (eat your heart out Dick Van Dyke, but I forgive you Sally Ann Howes). The ingredients remain the same; well, I expect some Health Mogul has fiddled with them a bit, but they certainly look the same. The packaging on the other hand, has taken a quantum leap and now resembles something fit for launching into outer space. It's all high-tech plastic, including a super-hygienic top that imitates the liquorice tube, but is also made of plastic and must be removed to reveal the real thing inside.
Ah, joy! What a wonderful way to spend a Christmas..
My only problem is that I must now work out a rationing scheme in order to stretch out the pleasure as long as possible…
Posted by David at 22:00