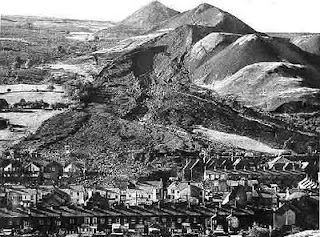 The recent flash floods in parts of Spain, most notably in Jaén, where rivers of mud flowed through a number of villages, and the terrible mudslides in Taiwan, brought to mind the coaltip slide in the Welsh village of Aberfan.

The problems in Spain and Taiwan were almost unavoidable, caused by highly unusual weather conditions and with no warning. Aberfan was different. There, 144 people, including 116 children were killed in 1966 because of the stubbornness of the National Coal Board and, more specifically, the chairman of that organisation, Lord Robens of Woldingham.

Aberfan is a small village situated in one of the former coalmining valleys of South Wales, a few kilometres south of Merthyr Tydfil. Like most (all?) mining villages at the time, the slopes of its valley were dominated by coal tips. When I lived in Gelli, in the Rhondda Valley, during the 1950s, I would climb up the valley sides to play on the tips—they made great slides and you could get really dirty. (Heaven only knows what else was tipped there, but the lake (it was probably no more than a pond, but it seemed like a lake in the eyes of the child) in one of the tips contained a red liquid.) At the time, too, we were used to tips creeping down the valley sides, gradually approaching the rows of houses towards the bottom of the valley. There were no safety precautions for these tips, neither for their placement, nor for their further exploitation. Several of the tips above Aberfan had been built up over a number of springs, that were clearly marked on maps made prior to the initiation of tipping.

The seepage of water from the springs below the tips, combined with effects of several days of rain, had already caused warnings to be raised about the possibility of an imminent tip slide. The warnings were ignored. On the morning of 21 October 1966, just as the children of the Pantglas junior school had finished assembly and were starting classes, a huge mass of rocks and slag separated from the tip and bore down onto the school itself and the houses of Moy Road, 20 of which were literally demolished. Part of the school was simply wiped out as the slide surged into the classrooms, killing some instantly, while others had a slower death under the blackness. Despite frantic rescue efforts that went on for hours and hours, no child was found alive after 11 o'clock that morning.

Robens, an Englishman, was informed of the disaster, but instead chose to go to his own investiture as chancellor of the University of Surrey, putting a silly ceremony at an English university before the lives of the Welsh schoolchildren. The NCB's attitude was further demonstrated by its officials when the Secretary of State for Wales tried to contact Robens in Aberfan, only to be told by them that Robens was personally directing rescue work, when he simply wasn't there. He turned up during the evening of the next day, and then took cynicism a step further by telling a reporter that the accident was unavoidable and attributing it to natural and unknown springs below the tip—a blatant lie, as the springs were shown on maps and the locals remembered them from before the time that tipping started on them.

During one of the inquests, the coroner wanted to note the cause of death for thirty of the victims as "asphyxia". Amidst calls of "murderers," one father stood up and said, "I want it recorded: Buried alive by the National Coal Board. That is what I want to see on the record. That is the feeling of those present. Those are the words we want to go on the certificate." I suspect that this is not what was recorded, but it is most certainly the truth.

Robens went on to steal £150,000 from the disaster fund (almost £2 million had been collected), which he used to comply with an order to remove the tips above the school. You can just imagine him chuckling about his cleverness, together with his lordly chums in their London club (no women or Welsh admitted, no doubt). Unbelievably, the Labour government of Harold Wilson allowed this monstrosity to stay on as chairman of the NCB. The Labour Party! Brought to power largely thanks to the efforts of Welsh coalminers, now turning against their very own at a moment of high personal crisis. This might well be the moment when the Labour Party moved away from their socialist ideals and took a right fork towards capitalism.

Further information about the Aberfan disaster can be found at

The Aberfan Disaster
Wikipedia article on Aberfan
British Pathé archives: This Is Tragedy (other films available)