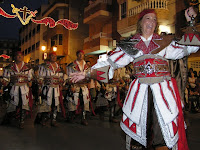 To have a better idea of the costumes, see my gallery of photos.
Posted by David at 14:04