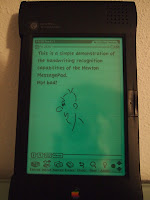 When the Newton first came out early in 1993, I thought it was a great concept. As the line developed, so did its greatness, right up to the MessagePad 2100, which was to be the last of the production series, discontinued early in 1998.

The Newton was way, way ahead of its time and it can still do some things better than the PDAs of today.

I started collecting a few Newton items some ten years ago, but now has come the time to sell what I have and that is the purpose of a small site that I have created. There are MessagePads, accessories, and even some software and other third-party items offered for sale there. I still have a few items which I shall add to the list, too, but a trip to Belgium will have to occur first, as they are in the apartment there and I'm in Spain!

Remember that everything is second-hand and much of what is offered is electronic equipment of well over ten years old. I offer no guarantees, other than to say that everything worked the last time that I used it.
Posted by David at 21:12