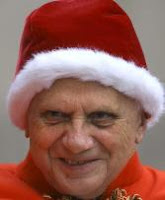 If the Catholics wish to send Herr Pope on silly holidays such as this, then let them pay for them themselves. The Catholic Church (like most other organised religions) sucks enough money out of its followers, especially those most in need, and has sufficient riches to finance the Pope's occasional outings and anything else that needs to be paid for, so why ask the Spanish government for aid? Has it passed the Catholics' attention that Spain is suffering a crisis, with over 20% unemployment, rising to some 45% among the young? Has it passed the Catholics' attention that there are plenty of non-Catholics, believers or not, that have no wish to see their fiscal contributions converted into support for a ridiculous manifestation of power and control?(And what about the bible's contention that the love of money is the root of all evil, not to mention Jesus Christ's own rants against money lenders and temple traders? Do these mean nothing to the Vatican and its deluded followers?)

Let us hope that for once the Spanish government will truly stand up to the pressure so often put on it by the Catholic Church and will quite simply refuse to give even one eurocent to the money-grabbers. Indeed, why not ask the Church to pay for any and all extra costs incurred in Spain by this ridiculous Papal visit?
Posted by David at 13:45