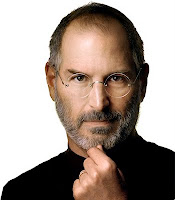 Steve Jobs is no longer the CEO of Apple. Hardly surprising, given his precarious state of health during the past few years. It is amazing that he has been able to hold on for so long. Still, the time to go (at least to some extent, as he retains certain functions within Apple) has come, a fact that he recognised himself.

All best wishes to him.

The man chosen to be the new CEO, Tim Cook, has, to all intents and purposes, held that position for some time, as Jobs's health has not allowed him to be fully functional. There is no reason to assume that Cook is not up to the job. Indeed, he get Steve Jobs' own blessing.

Of course, the soothsayers and speculators are immediately spelling doom and asking if the company can survive without Jobs.

It is true, that Apple and Jobs made an apparently happy couple, though not everything in that particular garden was rosy and Jobs showed elsewhere that he did not always have the magic touch.

Apple's technological breakthrough, indeed, came largely because of Steve Wozniak, rather than Steve Jobs. Wozniak was the technical genius of the pair, whereas Jobs was more the visionary and salesman. The Apple II was the machine that brought Apple onto the world scene, though it was certainly not the first personal computer (nor was the IBM PC, which came along even later). The Macintosh did not appear until 1984 and at least one failure preceded its somewhat hesitant entrance into the field of personal computing. Apple's pricing policy and the sheep-like attitude of corporate buyers (epitomized by the expression, "You don't get fired for buying IBM") meant that Apple struggled and in 1985 Jobs was let go.

During the late eighties and most of the nineties, Apple, without Jobs, continued to lose its way as far as product range structure in the Macintosh line was concerned, yet still managed to be extremely forward-looking in other areas, notably in that of hand-held devices or PDAs (Personal Digital Assistants). The Newton range was way ahead of its time, perhaps too far ahead for the available technology, so that, overpriced and underpowered, it had to be dropped from the catalogue after eight years, when Jobs returned in 1997 and wielded the axe.

Whilst away from Apple in the nineties, Jobs was not particularly successful as far as sales were concerned. He led the development of the NeXT computers, which cost a great deal and sold only in small quantities. NeXT, however, ran NeXTStep, a Unix-based operating system that looked just like the sort of thing that Apple needed to replace its struggling MacOS. So Jobs was called back to Apple and NeXTStep was adjusted to become MacOS X in the new fancy-looking iMacs.

During the following decade or so, under Jobs's leadership, Apple would provide the world with the iPod, the iPhone, the iPad and a series of MacOS X releases that showed that computing really was for the rest of us.

It would be wrong to think that Apple is Jobs, however. Apple is loaded with highly capable people—just consider the likes of Johnathan Ive, designer extraordinaire—who form a team that is likely to continue long after Jobs switches off his iPad forever.
Posted by David at 15:06