A Bad Case of Wind 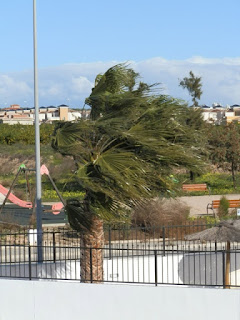 Yes, indeed, a very bad case of wind, and a whole week long, too.

It all started last Saturday. We were visiting a house just outside the urbanisation, when the wind stated blowing ever more strongly, becoming almost frighteningly strong. Then, during perhaps ten minutes, the sky turned a most peculiar shase of grey and we had a heavy downpour of rain. Well "down"pour is hardly an appropriate term, as the wind blew the rain almost horizontally.

That was it as far as rain was concerned, though it did rain a little more a few days later, but we were in Elche at the time, so missed the event.

The wind, on the other hand, remained, and only today has really stopped. During hte whole week it has varied from almost gale force to a strong breeze, sometines with an intense cooling effect, at other times quite bearable.

This contrasts well with most other parts of Spain, where equally strong, if not stronger, winds have caused quite a lot of damage—trees and palms down, walls and other structures collapsed, a few people killed. In those parts, too, there has been flooding, caused by heavy rain- and snowfalls, landslides, huge waves battering the coast. Galicia and the rest of northern Spain has been particularly badly hit, though even down in Andalucía there have been severe conditions.

Today allis calm and we are looking forward to a good week ahead.
Posted by David at 12:55