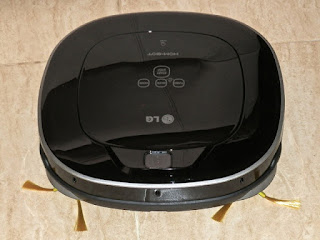 Long before Apple and Steve Jobs gave us the iMac, the iPhone, iPod, iPad, and i-whatever-next, science fiction author Isaac Asimov gave us I, Robot, a collection of robot-based short stories. One of those stories was called Runaround and had been first published in 1942. It contained Asimov's elegant Three Laws of Robotics:

All robots were (are) supposed to be have these three laws indelibly etched into their beings.

A few years ago, we visited our friends, Jan and Nicole, in Belgium. They had just bought a robotic floor-cleaner, a sort of mechanical pizza box that scampered around the house at pre-programmed times (or when commanded to do so), "vaccuuming" the floor, whilst carefully avoiding chair- and table-legs and other possible hindrances to its assigned task. Jan and Nicole were very enthusiastic about it and, needless to say, their enthusiasm rubbed of on She Who Must Be Obeyed, though less so on myself. After all, I had read all the robot stories and novels ever written by Asimov, so I knew what could go wrong…

The chosen model is an LG Hom-Bot, and it clearly does not have Asimov's Three Laws of Robotics built into it.

I swear it's got it in for me.

It runs around the living-room, into the kitchen, into the bathroom, into the bedroom (it can't climb stairs, but we have a bedroom downstairs), and also makes a beeline for me, or cunningly waits around a corner, ready to attack as I approach from the hidden angle, bumping into my foot and obviously attempting to trip me up.

This is in blatant contradiction to the First Law of Robotics.

To be fair to the creature, it seems to do its job well.

I just wish it would follow the three laws.
Posted by David at 13:29