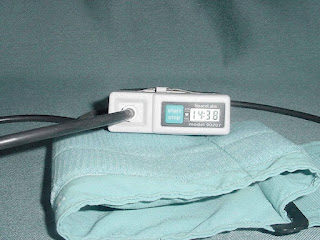 So there. 24 hours with a SpaceLabs Model 90207 Ambulatory Blood Pressure (ABP) Monitor: a glorified blood-pressure metre, in other words, with the pressure being measured every 30 minutes during the day, and every hour during the night.

Especially as the batteries failed after the first two measurements and the error code (EC08) gave a lot of information as to why the machine was beeping, but not pumping. Not even finding a handbook, complete with error codes on the Web was of any help, as no mention at all was made of low batteries. Phoning the hospital didn't help, as the nurse who knows everything was no longer there and the specialist, a pleasant enough chap and undoubtedly an expert in his field, only proved the old story of the blind men and the elephant. Anyway, sorted the problem out and let the machine get on with its measurements. Each time it was about to start a measurememt, it would beep three times, then the pressure cuff would tighten around my upper arm, and after a while the pressure would be released and the machine would then give one long beep to indicate a good reading, or three short beeps to indicate a poor reading, in which case the procedure would be repeated after a few minutes.

Can you imagine that going on each hour during the night? No, I didn't sleep, either.

Well, I went to see the nephrologist with the results yesterday afternoon and he was satisfied that my average blood pressure is at an acceptable, if slightly high level. He also checked the results of the blood and urine analyses he had requested me to have prepared.

No problem with the urine. The blood, on the other hand, might point to a new problem.

The thing is, when the blood was first tested, the bicarbonate level was found to be very high, so high, indeed, that it was thought that an error had been made in the laboratory. I had more blood taken a couple of days before visiting the nephrologist and the results were emailed to me as I was talking to him. I received them on my iPad: the bicarbonate level was even higher! The nephrologist simply refused to believe that I could walk around with such a high level and dismissed the figure as a laboratory error. As a result, I must have more blood taken on Monday for the test to be repeated at a different laboratory.

In the meantime, my arms are beginning to look like those of a drug addict and I am beginning to feel like a close relation to a pin-cushion.
Posted by David at 15:34