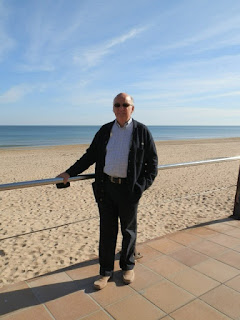 I honestly didn't think that the recovery from the operation I had at the end of November to remove my left kidney would take so long and be so difficult.

I've had just a few good days, but plenty of bad ones: the ups are short-lived, the downs seem to go on forever.

At least the pain has been largely reduced to a bearable discomfort, though its almost constant presence is very annoying. Apart from that, I become tired very quickly and am still not able to eat as I used to, with far less appetite and a strange alteration in the way I taste things. Sweet things, especially, seem far sweeter now than before the operation.

A few days ago, I felt well enough to go for a walk with Elise along the paseo in Guardamar: the sea was like the proverbial millpond, the sky was a deep blue, only lightly streaked with feathery clouds, the sun was shining, the few tourists from the north were in their shorts and T-shirts (one was actually sunbathing on the beach), the Spanish were in their winter furs (one even had ear-muffs), we were somewhere in between.

The walk went well, so we decided to repeat the exercise the following day. This time things did not go so well. I quickly became very tired and felt extremely weak, so we had to return home. Yesterday, too, we tried to have a meal in a local restaurant, but I simply could not enjoy more than the first course, becoming ever weaker and feeling nauseous.

Today I have to have a 24-hour blood-pressure meter fitted and tomorrow I shall visit the nephrologist. The thinking is that the right kidney might not be accepting its added responsibiltiy.
Posted by David at 11:41