It Never Rains, But It Drips 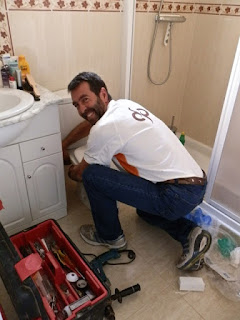 Well, it's not entirely true to say that it never rains in this part of Spain, but rain is certainly a very infrequent experience. Since returning from Belgium last March, I imagine it has rained at most six times.

A week or so ago, I walked into our downstairs shower-room-cum-toilet and was surprised by a large amount of water covering the tiles. We are not in the habit of having water-covered floors, so something was clearly wrong.

After having removed almost all of the water, it was clear that more was arriving at a fairly steady rate from the back of the toilet.

Closer investigation revealed that, presumably in an attempt by Nature to compensate for the shortage of water previously outlined, the cistern had cracked. Exactly how and when this happened was a mystery, but a moot one.

Fortunately, we have a second toilet upstairs, so it was not going to be a question of buckets and spades. All we needed to do was to turn the water off that led to the cistern and then call Antonio to see if he could replace the cistern/toilet/bathroom/house, in that order of importance.

It turned out that the make of the toilet, Bellavista, is no longer produced and sold in Spain, so it was not possible to buy a replacement cistern, nor even a full toilet of the same model. We therefore opted for a simple model called Victoria, made by Roca, and today Antonio came to fit it. He would have come earlier, but he took some medicine that didn't agree with him and had to spend some time closely examining the inside of a toilet bowl himself, as well as a night in hospital.