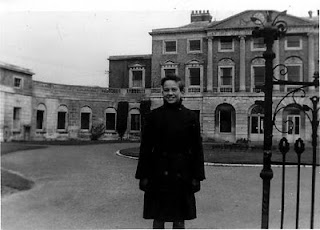 It's that time of the year again and already the Christmas cards have started to arrive. Surely it was Easter only last week?

Anyway, one of the very first cards received this year was from one Dennis Lingard, a fellow I've not seen for over forty years. He was still living in Blackheath at the time and had a decent collection of Monkeys records.

Dennis's card included a letter, in which he reminded me that it was fifty years ago this year in September that we started our time together at Woolverstone Hall. Dennis and I were in the same year and class and both spent seven years at the school, from 1960 until 1967, when we left to make our separate ways in the world. If I recall correctly, Dennis became head boy of Hanson's House, while I was head boy of Corner's. Exactly what happened to Dennis after leaving Woolverstone, I do not know, but from the few contacts we have had, and these have only been in the past few years, mostly brief exchanges at Christmastime, he works in the same branch as I was involved in, software development.

It had completely passed my notice that we started at Woolverstone fifty years ago—that's half a century, in other words, and that seems like an awfully long time. Einstein had it right, didn't he? Time really is relative. When I was small, there were at least five years, perhaps more, between each Christmas and the same was true for birthdays. Now there's merely a few months and if it goes on like that, I'll soon be celebrating next Christmas before this one.

To get back to Dennis and his letter, it's amazing that so many of us Woolverstonians still think so much about the place. It must have had a significant influence on us, more so than a "normal" school has on an "ordinary" pupil, I feel. Woolverstone was a magnificently successful experiment in Socialist-driven education, scuppered by the greed of Conservative horse-blinkered politicians, who couldn't see the benefit of subsidizing the education of some relatively gifted pupils as an investment for the future. (That sort of thinking sounds conspicuously like the Conservative's attitude to University subsidies nowadays and if I were a student, I'd be out on the streets protesting, too, and I'd burn my Liberal party membership card, if I still had one).

See that, off course again, so back to Dennis. He wrote that a number of Old Boys from the 1960 intake paid a visit to the school in October and enjoyed a pleasant reunion. I bet they didn't run a cross-country as part of the celebrations!

Another Woolverstone reunion, on a much smaller, but more poignant scale, will take place in Australia in January—see my previous post.
Posted by David at 17:19