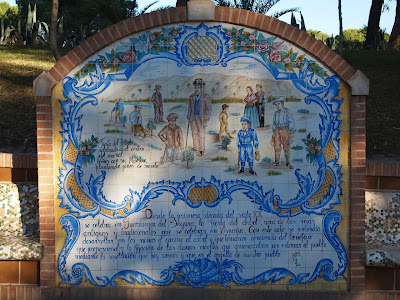 We have now arrived at the fourth large panel of tiles on the Paseo Ingeniero Mira. Fortunately, this one does not have a waste-paper basket to spoil it, though the mosaic benches that flank it are in need of some urgent repair, with many of their ceramic tesserae missing—see especially the bench to the right of the photo.

(Caption to drawing) Day of the Tree, celebrated in the middle of the dunes. Children with their teacher, planting pot-grown pines.

(Main text) Ever since the first decade of the twentieth century, the Day of the Tree has been celebrated in Guardamar del Segura, one of the oldest and most traditional of such days celebrated in the whole of Spain. In this way, it was hoped to instill in the children a love for trees and to help them understand the benefits of keeping the moving dunes under control, preventing them from covering the village by means of replanting, which we now see as the pride of our town.

The original photograph by Engineer Mira y Botella was taken in 1901, so it is clear that his work had already made a strong impression on the local population. Nowadays, everyone is aware of (well, should be aware of) the environment and the need for conservation, but I suspect that Mira was quite a bit ahead of his time when he was able to stir up such enthusiasm as is evident in this and other photos. And what a pity his insight into the need to fix moving sands was not heeded elsewhere, with such blindness eventually resulting in tragedies such as that of Aberfan. 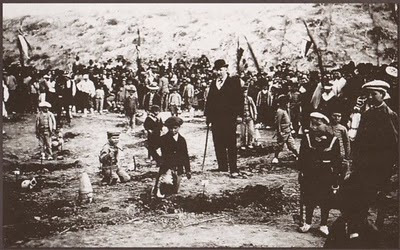