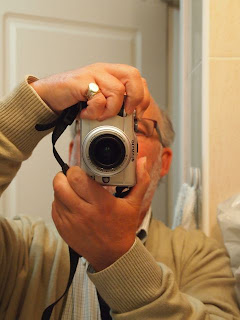 We went out to do some Christmas shopping yesterday. That wasn't the reason we went out, but that's how things turned out. Mind you, we did some ordinary shopping, too. You know the sort of things, meat, vegetables, fruit, dairy products, and so on. Everything that's needed for a healthy diet in the eyes of She Who Must Be Obeyed: not a piece of chocolate to be seen, not a caramel, or a cream tart, although I did manage to sneak in a slab of turrón de Alicante (a sort of block of nougat), so life won't be all gloom and doom.

Anyway, we made a great effort to support the local economy, too, given that it's Christmas. Elise bought a nice watch and I am now the proud owner of a new digital camera.

I have used Olympus cameras since about 1974, when I bought my first Olympus Pen. It was the Pen FT model, a second-hand one, which I bought it in a small camera shop in Oudenaarde. The Pen was a beautifully designed halfkleinbeeld (half frame?) SLR camera, but unlike other SLRs of the time, it was not bulky or heavy, it was simply beautiful; Marilyn would have called it Elegant.). It also had the advantage of taking twice as many photos on a given roll of film. Sadly, my beloved Pen was stolen when we were on holiday in the south of France. I hope that the person who stole it realised what they had and took great care of it, or at least sold it on to someone else who did so.

Anyway, I stayed with Olympus, then buying an OM1 SLR camera, which became the basis of an ever-growing collection of lenses and other attributes. Eventually, I needed a large aluminium case in which to carry everything and it finally all became too heavy for me. I sold everything some ten years ago, after first having bought an early Olympus digital camera. After a few years, I wanted rather more than that relatively simple camera could offer, so I found an Olympus Camedia C-750 Ultra Zoom, which has served me well for the past 6 years.

A couple of years ago, however, Olympus announced a digital version of the Pen design and things started itching. "Shall I or shan't I?" has been a question often pondered over: the first Pen EP1 had its teething troubles, the EP2 is considerably better, but out of my price range, but now the lower cost EPL1 answers my requirements and offers the advantages of the Pen system.

The circle has closed: I started with a Pen and now I have ended up with a Pen once more.

I hope it lives up to its predecessor.
Posted by David at 12:50